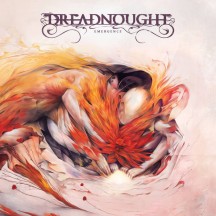 
Earth, ether, water, and now fire. After contemplating the beyond on Bridging Realms and plunging into the depths on A Wake In Sacred Waves, how do Dreadnought sound when tackling Prometheus's gift?

Overall, not wildly differently from their past efforts. If you've heard the previous albums, you'll find the sound of Emergence to be clearly recognizable as Dreadnought, but for those unfamiliar with the group, they are on the surface an extreme prog band. Stretches of heavy, often black metal-tinged, and at times fierce intensity are interwoven with extended periods of quiet, ethereal melancholy, featuring ambient keyboards, clean guitars, and regular cameos by flute, saxophone, strings, and more. This is all underpinned by reliably energetic, sometimes jazz-inspired drumming and alternating harsh black metal shrieks and clean vocals delivered by guitarist/multi-instrumentalist Kelly Schilling and keyboardist Lauren Vieira.

Further characteristics that define the unique sound of Dreadnought include the prominent use of keys in both heavy and quiet sections, leading to the unusual combination of extreme metal riffing and dainty piano work, and the almost post-metal-esque building of layers and volume as softer stretches march towards transitions into the heavier sections. Add in a distinctive production, and you have one of the most intriguing extreme prog metal bands around. However, everything that's been said so far could apply to their discography in general. What, if anything, new has been brought to the table this time around for Emergence?

Having listened to this and its two predecessors in succession, I'm not sure there's any one thing that's wildly different. Perhaps the various keyboard styles (the ambient synths, the piano, and the prog rock key solos) are further towards the background on this album, whereas they were more prominent on past efforts. Aside from that, however, there's things that stood out, but more on a song-to-song basis, and perhaps that in itself is the main strength of Emergence. As much as I enjoy their previous albums, I feel like for the most part, the songs all felt like rearrangements of the same ideas, whereas perhaps there is more diversity in approach here. For example, often in the past, when moving towards quieter parts, the various instruments would all strip away before slowly rebuilding from a muted base. Whilst that does happen on occasion here (see about two-thirds of the way into "Pestilent"), on my favourite track, "Tempered", the transitions feel smoother, calming the instruments down rather than axing them altogether, and on "Besieged", the regular interchange between the louder and softer sections is utterly seamless.

Another relative novelty is closer "The Waking Realm", which takes their quiet build-ups to new lengths, going six minutes without a distorted guitar and a further five without extreme vocals, at which point the song erupts into blastbeats and tremolo riffs. The unidirectional approach towards the intensity of this track really stands out from their past efforts.

One thing I was perhaps hoping for some improvement on was the clean vocals. The singers themselves have good voices, and the dual-vocals approach can be quite effective; however, I feel like they could work on the vocal melodies, which even here feel like they're lacking a clear direction or structure. On the flip side, I continue to enjoy the wailing, banshee-esque edge to some of the harsh shrieks, whose entry towards the beginning of "Pestilent" is one of my favourite moments of the album.

To be honest, I'm not sure Emergence really feels like a 'fire' album; I think their sound feels most suited for conjuring celestial, mystical imagery, and as such Bridging Realms remains their most convincing elemental invocation. For me, Mastodon pulled off the whole elements approach more successfully in terms of variety in sound. However, leaving concepts aside, I feel Emergence is the most rounded and complete Dreadnought album yet, and even though there's certain aspects to their approach I think could still be improved, the progression accomplished so far makes this my favourite effort of theirs to date.

Written on 12.05.2019 by
musclassia
Hey chief let's talk why not
More reviews by musclassia ››