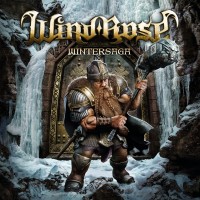 
It was obvious that European flower metal could've never reached its peak unless they covered fucking "Diggy Diggy Hole". Yes, it's a cover. Of a song with a Minecraft video. We live in the best timeline, folks!

At this point whatever else I say about the band is pretty moot since you already know everything you need to know about the album, but stick around if you want to see me try to praise an European flower metal album. So here we have a Wind Rose, a power metal band from Italy, who also have bits of progressive and folk and symphonic metal in their music, but the core of the music, at least on Wintersaga is just the epic branch of power folk metal. Epic might not have been necessary there since what power metal isn't epic, so let me rephrase. It's less of the let's-slay-a-dragon power metal, but more of a folk metal album about dwarves that may or may not want to slay a dragon after they finished being drunk and digging holes.

The album heavily relies on folky choir-like vocals and a lot of keyboards, less of the mind-numbingly-fast-solo type but more of the fantasy-game-soundtrack type, with just enough guitars and drums to make it qualify as metal, and the occasional violin for the extra folky touch. So yeah, massive amounts of cheese to be found on here, and the massive burden of having to not use "epic" at every sentence, because damn does Wintersaga really test my power metal vocabulary with how absolutely epic it sounds. And honestly the biggest internal debate I have about this is whether this is more of a folk metal album or a power metal album. Which one would I be most ashamed of admitting I love?

It has quite a lot of crossover potential, given that you're willing to not take it too seriously, from the storytelling power metal of Blind Guardian or fellow countrymen and symphony enthusiasts Rhapsody, the comical Finntroll, the epic Turisas, the drunken Korpiklaani, even the Tolkien-loving Summoning (I'm strangely reminded of the choirs in "Land Of The Dead" while listening to this). Wintersaga does have the potential to appeal to a lot of people, it's so fun and simple but it does enough seriously to not fall into parody and staleness. There's comical songs like the aforementioned "Diggy Diggy Hole" and long and symphonic songs like "There And Back Again" and "We Were Warriors".

Hey did I mention that they fucking covered "Diggy Diggy Hole"?

Written on 30.10.2019 by
RaduP
Doesn't matter that much to me if you agree with me, as long as you checked the album out.
More reviews by RaduP ››