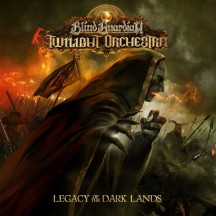 
The long-rumored Blind Guardian symphony has arrived. For 20 years, this album was an ethereal dream, but things have been coming together lately: Demons & Wizards reunited for a promised third album, and Hansi Kürsch finally made his way onto an Avantasia album (which I was certainly waiting for - I don't know about the rest of you). And now, at last, Blind Guardian's pet project is out in the open.

While I'm sure Blind Guardian themselves would have preferred to get underway much earlier, the lengthy incubation period likely served them well; in the last two decades, they have had the chance to experiment with the type of orchestral songwriting that Legacy Of The Dark Lands demands. Songs like "Sacred Worlds," "Wheel Of Time," and "At The Edge Of Time" now appear to be obvious forerunners to "The Great Ordeal," "Point Of No Return," and "War Feeds War"; we could go as far back as "The Maiden And The Minstrel Knight" from A Night At The Opera for a clear instance of the Bards testing their symphonic chops. Yet they have never before wrought anything as ambitious as Legacy Of The Dark Lands, whose two-plus hours of dense ensemble storytelling present a possible challenge for fans of even Blind Guardian's most progressive tendencies.

Legacy Of The Dark Lands is a symphonic album, not a metal album - exactly what was advertised, whatever it means - and that takes me out of my depth as far as detailed reviewing goes. What I can say is that this album goes beyond stripping away guitar, bass, and drums and leaving the frames of recognizable BG tracks for the Prague Philharmonic Orchestra to take over; even doing that much would be dangerous, because Andre Olbrich's singular guitar work is as important to the Blind Guardian sound as Hansi's voice. Yet Olbrich has adapted his songwriting to suit the form as well, leaving us with a choir, an orchestra, and a leader and no guitar to be found anywhere. Tough decision. Rare are the pieces that would sound like traditional Blind Guardian fare given a change in instrumentation ("In The Red Dwarf's Tower" and "Harvester Of Souls" might qualify). These tunes have more in common with the folk, prog, film score, and straight symphony that Blind Guardian always acknowledged or took influence from rather than the hybrid power metal epics that the band produced itself.

Perhaps that's why they have branded this project "Blind Guardian Twilight Orchestra"; this isn't meant to be just another Blind Guardian (I say as if any Blind Guardian album can be described as just another ____), and treating this album as such would only serve to disappoint your expectations. There are still similarities: not only will many of the backing vocalists sound familiar, but, if you listen to Nightfall In Middle-Earth twice a day like I do, you'll immediately recognize the voices of narrators Norman Eshley and the late Douglas Fielding, who lent their talents to this project. And, naturally, the one and only Hansi Kürsch sits at the helm of every major piece, as bardlike as ever. Hansi's range seems only to expand with age - he really pushes himself on this album, and there are a couple of notes that made me sit up straight. Range, tone, feeling, texture: Hansi has it all, and even if I'm not quite sure how to handle music so far out of my wheelhouse, it's enough for me to hear Hansi belting out myths and legends over a full orchestra.

Having said all of this, there are important questions about this album that demand answers:

Is this better than having a regular successor to Beyond The Red Mirror?

Well, it's different. I sure can't wait for the next proper Blind Guardian album, that much is true, but I appreciate the existence of Legacy Of The Dark Lands - not only because, as a fan, I'm glad that one of my favorite bands has finally gotten the chance to fulfill its longstanding goal, but because I don't listen to a lot of music like this, and being able to point to a magnificent two-and-a-half-hour symphony as something produced by a metal band is really cool.

Is the story interesting?

I don't know. I rarely read lyrics and I'm not good at following concept albums, so I couldn't actually tell you what the eponymous legacy of the dark lands is, but the high fantasy atmosphere is too palpable to ignore even without much of a literal understanding.

Will I listen to this again on my own time?

Hell yeah. Sitting through the entire run is a special-occasion sort of endeavor, but this is a great album; even the least interesting tracks make for good background music (it's Hansi singing over an orchestra, so nothing can go wrong), and songs like "War Feeds War" and "Point Of No Return" are climbing the ranks into my favorite BG tunes.

I haven't rated this album because it belongs to a genre I have no experience in - not that there is much precedent for this in heavy metal, either. This is probably a unique album on this website. But, as I've indicated, I'm pleased that this project has finally come to fruition and I hope that other Blind Guardian fans find it as rewarding as I do.