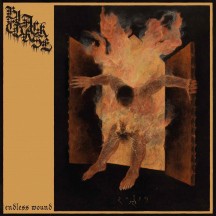 
It really takes a supergroup of Blood Incantation, Spectral Voice, Primitive Man and Khemmis members to properly drag you back to hell.

I am somewhat hesitant to call Black Curse a supergroup, not because their members aren't from bands of reputable names, but because Black Curse was formed in 2015, which was before Starspawn, Eroded Corridors Of Unbeing, Caustic, and Hunted; and also because of how calling bands supergroups usually ends up making the album unable to live up to the hype. So regardless of how you look at it, we have musicians involved in some of the most groundbreaking and impressive extreme metal of the past five years coming together into a cohesive unit of spewing extreme metal.

Endless Wound sounds very retro in a way, taking major cues from first-wave black metal, back when thrash, death, and black metal were sort of in the same melting pot. And at the same time if feels like something clearly done with years upon years of extreme metal influence. It's as if taken from an alternate universe where extreme metal never split up into multiple genres and this is the lovechild of all of them. Look at the cover art, for example. It clearly has a sort of retro almost cassette-like vibe to it with the logo and an illustration, but it doesn't feel like something that could've been an 80s extreme metal album. But the illustration clearly captures the enrapturing and engulfing hellish atmosphere of the music. Endless Wound lives in that window between our world in which it exists and we listen to it, and the alternate universe in which it feels like it was pulled from. It's bordering closely on what we call war metal, but with clearly enough of its own sound to sound more than a Blasphemy clone.

And with such reputable people behind it (or rather coming from reputable bands), it comes as no surprise that the performances here are fantastic. But hot damn did I not expect them to go above and beyond in how vicious and bludgeoning it is. The vocals go from demon-like gurgles to low-grunts, unbridled screams, or manic uttering. The bass takes center stage at just enough points, and its presence is otherwise not hard to miss. The guitars almost don't feel like guitars at times due to the production, which is a very risky thing to have, but it makes the album feel so much more inhuman, and so much heavier when they actually clearly do feel like guitars. The soloing reminds me a lot of Kerry King's erratic solos in Slayer, except that they're... you know... actually good. And it is the drumming, which is usually the one instrument easiest to be impressed by in such an album, that shows surprisingly the most restraint. And not in the "it never goes wild" way, but in the "it never goes wild in spite of the rest of the band", thus everything it does, regardless of the pace and energy feels like just the thing the song needs. That is actually the case for the entire record, but is clearer to observe for the drums, but once I made that observation, I could clearly feel how well thought-out this album is to feel as unrelenting as it does.

The aforementioned production is something a bit harder to get into at first, being clearly as raw as the 80s paste of extreme metal that this album oozed from, but also raw in a way that feels really thought-out. Even if it makes the bass or the guitars not feel as colossal as some of the cavernous death metal production it could've had instead, I feel like Endless Wound makes this type of production fit like a glove. There is some emphasis on crafting atmosphere as well, especially in the doomier parts, but it's never the main focus. So ironically this makes it feel more extreme and evil, which it really has no difficulty in evoking. It's like they found just the sweet spot that sounds similar enough to a lot of things already done to death, but in an area of it that wasn't properly explored. And how lucky we are that the folks who explore it are some of the best musicians currently doing extreme metal.

Written on 13.04.2020 by
RaduP
Doesn't matter that much to me if you agree with me, as long as you checked the album out.
More reviews by RaduP ››