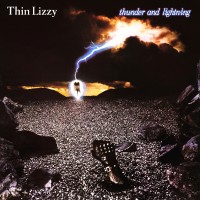 
"Like Thunder and Lightning, god damn it's so exciting"

The best summation of the album comes from themselves; serving as the final album for Thin Lizzy, it sounds more motivated and full of energy than they had in years. The band found a way to re-invent themselves that sadly we only got to hear on this one release from this version of the band. What a hell of a way to sign off one of the best bands in history; firing on all cylinders, Thin Lizzy ride off into the sunset at full speed and we are left in their dust ruminating what could have been.

Thunder And Lightning is [Band]Thin Lizzy[/band] filtered through metal; if you were to strip these songs to their bare bones (which they do on the demos available on the 2013 re-release, well worth a listen), they are Thin Lizzy songs through and through, though with more emphasis on the rock than on the roll.

John Sykes' skills on guitar are an ingredient that adds an explosive element to the mixture; the band wisely realised what they had in the man and bring in a mix of songs that are written to allow him to take centre stage while also keeping their traditional sound in there. The effects on Lynott's bass serve to give him a sound that supports Sykes perfectly while also slotting in with Downey's drums. Wharton's keyboards are the icing on the cake, sprinkled over the top of the songs to give them that little something extra.

If I had to pick the best songs off the record, "The Sun Goes Down" is a morose, sombre song that would rather fittingly serve as the final single with Lynott at the helm. The keyboards are used to superb effect and along with the bass create an atmospheric soulful tune. "Bad Habits" could swagger with the best of them, and Sykes' skills were funnelled through a track rather than being put front and centre, before being let loose on the solo. Finally, we get to "Cold Sweat", a track that is the opposite to "Bad Habits", with Sykes being front and centre and showing off a guitar solo that would make Eddie Van Halen jealous.

There is little to fault on this record; if I had to find issue with something, it would probably be "Heart Attack". It is not a bad song by any stretch but something has to be the worst track and "Heart Attack" just doesn't click as well as rest of the album does. Still, when this is the worst track of an album, you know the thing is full of quality.

Alas, all good things must come to an end and it is here that the story of Thin Lizzy with Lynott comes to an end. It is the perfect swansong for the band and testament to the talents of the man behind the microphone; it was a shame lightning was not to strike twice but for that brief moment, you get a flash of pure brilliance captured on an album that ranks among the band's best.