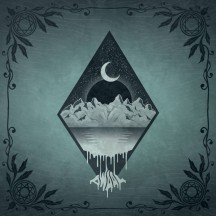 
Gospel Of The Vile isn't quite as putrid as the name would imply; however, it's still a punishing, yet rewarding, listen.

Dwaal are a six-piece from Norway, and Gospel Of The Vile is their debut. The group certainly haven't held back with this release, with the six-song record running comfortably past the hour mark; however, there aren't many signs of immaturity on this debut, with the songs well-crafted and earning their extensive runtimes, bar the odd section that begins to drag. Dwaal serve up a blend of post-metal, sludge and doom, and much like Carrier Of Weight, last year's debut release by sludge doom band Eremit, the songs spend a lot of time locked into slow, grim abysses of crushing walls of distortion for extended stretches; however, the substantial post-metal element of their sound means that these songs do venture beyond riding a singular riff for 10 minutes or longer, and flow through more varied segments, as well as revelling in moments of levity before descending back into the mire of these colossal doom riffs.

"Ascent" opens the record, and is truly a brief rise before a long and devastating fall; it's comfortably both the shortest and softest song on the record, clocking in at just under 6 minutes and featuring clean vocals, a rarity on Gospel Of The Vile. It's certainly not lively; however, the delicate sustained lead guitars expand the sound above the glacial pace and sustained distortion that lay the foundations for this track and album, as do the ambient keyboards. "Ascent" is an achingly paced scene-setter of an opening, conjuring up a vista of a celestial landscape not unlike the one featured on the album's cover; "Like Rats" doesn't immediately collapse this expanse and suffocate the listener, patiently building during its first minute or so before it unleashes the first eruption of sludge doom. From this point on, however, there's nearly an hour of the record to go, and most of this is going to be spent trudging through similarly grim riffs, crawling at a snail pace and crushing the listener with the density of the low-end distortion.

However, as I said before, there is a substantial post-metal side to Dwaal, and the songs do take breaks from these assaults to offer listeners a breather. They also incorporate the post-metal elements into the sludge doom parts, layering some atmospheric guitar leads above the thick riffs to expand the soundscape and allow the songs to progress beyond their innate misanthropic bleakness to a place of beauty, however corrupted that beauty may be. These elements allow a song like "Gospel Of The Vile", which does make extensive use of its opening riff, to avoid pushing the boundaries of acceptable repetition to quite the extent Eremit did with songs like "Dry Land". After 6 minutes of bludgeoning with said opening riff, as enjoyable as they are, the subsequent transition into a more dynamic and fluid second half is welcomed, and allows this riff to take on a new and improved form when it inevitably makes a comeback, sliding between more primal and more elegant incarnations of itself as the song skulks towards a conclusion.

Just as it opens with "Ascent", its shortest song, Gospel Of The Vile closes with "Descent", its longest song, and after all the misery that one has had to suffer through in the interim, one wonders how much farther it is possible to descend. However, Dwaal bring out all the stops; "Descent" is oppressively slow, transitioning from soft to heavy and back to soft at the most languid of paces. Even when it offers some respite, bringing back the clean vocals midway through, there is a feeling of malaise, as if these are the last breaths of air before the album takes you under forever, which it does in the closing minutes with its climactic riff. This album won't be for everyone by any stretch of the imagination; music this slow and joyless requires a lot of patience to reap the rewards from. However, for those with the endurance to survive this level of sustained misery, Gospel Of The Vile is a cathartic and rewarding journey.

Written on 27.05.2020 by
musclassia
Hey chief let's talk why not
More reviews by musclassia ››