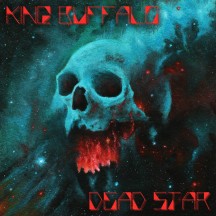 Rochester's King Buffalo are just one of a seemingly endless sea of up-and-coming acts in the stoner/psychedelic rock scene that have emerged in the past decade; however, I found 2018's Longing To Be The Mountain to be one of the most appealing records to come out of said scene, and it certainly raised my interest in any future records the band would put out. The laidback, gentle vibe of a lot of it, as well as the memorable riffs they delivered when they turned up the volume, made for a compelling combination, with the rich, low-end vocals of Sean McVay adding another pleasant layer on top. Dead Star takes aspects of that sound whilst also going in a few new directions; however, the end result isn't quite as captivating as its predecessor.

The first thing to notice about Dead Star is how imbalanced it is; of its 30-odd minutes of runtime, almost half of it is taken up by the two-part opener "Red Star" (there is also a radio edit of the latter half as a bonus track at the end of the album), and in addition to dominating the album runtime, it also dominates in terms of memorable and exciting moments. The more ambient, drawn-out percussive build-up of its opening departs from anything on their previous album; it's not until the 5-minute mark that the song locks into any kind of smooth rhythm, and it's another couple minutes before the guitars take over, with the keyboards arguably doing more to flesh out the sound early on. Nevertheless, this extended, gradual progression is well-judged by the band, with each step forward taken before any of the appeal of the track begins to diminish, whilst at the same time making the heavy riff that takes over around the 10-minute mark feel earned. When the song does transition into full-out hard rock, it has a surprisingly energetic galloping drive to it compared with the songs from the past album, with the more frantic guitar leads immediately grabbing your attention. King Buffalo have done long songs before, but the lengthier cuts on Longing To Be The Mountain didn't progress in this linear soft-to-loud manner, nor did they have as imposing an atmosphere as "Red Star" possesses.

This emphatic opening statement leaves the rest of Dead Star with a hard act to follow, and as such it works somewhat to the record's detriment, in a similar way to Rush's 2112. In isolation, "Echo Of A Waning Star" is a soothing folky ditty; however, it feels rather insubstantial given what immediately precedes it, and as such fails to leave much of an impression. More memorable is "Ecliptic", a subdued synth-rock instrumental that, whilst sounding a bit disconnected from the rest of the record, acts as a pleasant diversion before "Eta Carinae", the other truly substantial track on Dead Star.

Much like "Red Star", "Eta Carinae" doesn't share too much with Longing To Be The Mountain; the drum fills give the song something of a classic Black Sabbath feel, whilst the jazzy feel of the main rhythms give the song a more potent energy than something like "Morning Song". The "War Pigs"-esque moments throw me a bit, but the rest of the song is enjoyable enough; however, given how well King Buffalo pulled off the gentle hippie vibe on Longing To Be The Mountain, it's surprising to see so little focus on that sound on Dead Star (only "Echo Of A Waning Star" and the title track share a clear resemblance with the previous record), particularly as what there is here, "Red Star" aside, isn't quite as memorable. Truthfully, I've enjoyed giving Dead Star a few spins, but if this had been the album I had stumbled upon from a band previously unknown to me a couple of years ago, I'm not sure I would've given the record much attention after the first playthrough, except for perhaps the opening track. At the same time, I respect the band for clearly not getting too comfortable in one particular sound and managing to display a healthy range both within and between albums, and I'm excited to see where they go next after this.

Written on 30.05.2020 by
musclassia
Hey chief let's talk why not
More reviews by musclassia ››