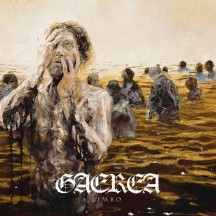 
Gaerea emerged in 2016 with their self-titled EP but they really drew attention two years later with their gripping debut, Unsettling Whispers. That one actually shared the award of my personal debut of the year along with Erdve's Vaitojimas, so you can imagine that Limbo was one of my most anticipated albums for 2020.

After two outstanding covers in black and white, Gaerea decided to add some colour and hired the famous Eliran Kantor for the job. I am personally not thrilled with the outcome, but luckily this is the only thing that left me somewhat unimpressed about Limbo. And no one can argue that the album title is very fitting to describe the current state of affairs in the world.

The band decided to air a full album stream a few days before the official release and they did in style; they played the vinyl while three of the members were sitting on a sofa and the other two were standing behind them, all barely moving throughout. One thing about Gaerea is that they expose themselves and their music in a very stylish way; the visual aspect (clothes, videos, album art, etc.) is obviously important for them but it would mean nothing without equally grabbing music to back it up.

Depending on which song (or part of a song) you listen to you can hear traces of Behemoth or Regarde Les Hommes Tomber, but these obscure guys from Portugal do have their own sound and definitely excel at crafting memorable songs. Not many bands manage to convincingly blend such brooding atmosphere with melodic grimness, devastating negativity, and total bleakness. Gaerea succeed in channelling their sense of blackness through stirring music. Their appeal strongly relies on their ability to weave post- and sludge into their black metal and also their persistence in incorporating a depressive and melancholic Advent Sorrow-ish undertone, while not neglecting the melodic Mgła-ish aspect. Add some unrelenting fury and you have Gaerea's uncompromising and still quite refreshing - despite all the namedropping - take on modern black metal.

Limbo is an album on which they sound even more immersive than on their debut, crafting longer compositions that pull the listener deeper into their black hole. The only track deviating from this motif is "Urge" which is the most direct and short song on here, and is also the last stop before "Mare", which in turn is the most expansive effort they have ever presented, showcasing Gaerea's post- leanings at their peak. These two final tracks are the ones I would play to anyone wanting to try out this band, because they manifest how they can they can be anything they choose to; intense and pummelling but also sombre and meditative.

The clarity of the mix helps bring forth Gaerea's exquisite talents, with the instruments and the vocals taking different forms to exude anger, agony and despair. You may find that Limbo sounds more Polish than Portuguese and indeed it does. It is also packed with the emotional catharsis and the raw ferocity we all need right now.