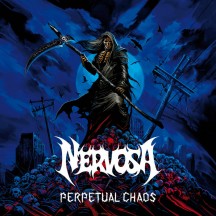 
This is the most blatant case of false advertising since my suit against the movie The Neverending Story.

Brazilian thrashers Nervosa have had a remarkable few years as of late; slowly raising their profile through consistent releases and successful tours, they have been flying the flag for a Brazilian metal scene that counts among its ranks Sarcófago and Sepultura. Fast forward to 2020 and this momentum threatened to stall with the news that all bar guitarist Amaral had left the band. The new-look Nervosa unleashed their latest effort Perpetual Chaos, which assuages any worries that this could signal the downfall of the band and instead offers hope that the new-look band can continue to rise through the ranks with a renewed vigour.

While never the most unique band in terms of their style outside the gender of the band's members, the lates version of Nervosa decide to cash in yet more of their uniqueness in order to hitch their wagon to the Arch Enemy train, upping the death metal mix in the formula more than before. Though the band are still predominantly a thrash group, the death metal flavour is pushed to the fore more than before.

Tracks like "People Of The Abyss", "Pursued By Judgement" and "Time To Fight" show the kind of bar Nervosa can set for themselves, songs that will have your brain reverberating for days and a whiplash claim sent straight to your insurer. Though these three tracks may come from the same mould, they are well formed and cast in steel to hit you with maximum force.

The death metal vocals come curtesy of new vocalist Diva Satanica, who is well-schooled of the Angela Gossow style of vocals, balancing a harsh enough tone to shed wallpaper off of the walls while being able to handle the guttural parts makes her a versatile weapon for the band. When contrasted to Schmier (of Destruction fame) and Erik Knutson (Flotsam And Jetsam) on "Genocidal Command" and "Rebel Soul", respectively, Satanica is more than able to hold her own to the benefit of listeners.
The new band assembled by Amaral are more than able to carry on the work of their predecessors; from the powerhouse drumming of Nota (who tips her hat well to Igor Cavalera on "Perpetual Chaos") and a solid low end provided by Wallace, Nervosa remain a formidable unit. Though it is clear the band are still learning the ropes in terms of songwriting nous, there is no doubt as to their performances throughout.

This leads into the main crux with Perpetual Chaos, that it is an album lacking in enough immediate highlights to give each track an identity of its own, exposing the band's limitations in terms of versatility. When listening to the album for more than a few tracks, the songs have a tendency to blur into one whirlwind of power, high octane guitars and hellish vocals; as enjoyable as this can be, it does restrict the enjoyment overall somewhat. However, towards the end of the album the band, does look to address this issue with tracks like "Blood Eagle" and the closing "Under Ruins", which branch from the all out thrash attack; nevertheless, the track itself isn't strong enough to convince you that this is a record with strength in diversity. Though it is early days for the new-look Nervosa and something that can be addressed with time, it is an early warning sign for the future.

Considering this record comes hot on the heels of a nigh-on new band being put together (and one that did not get to gel live beforehand given this was in the year of Covid-19) then Nervosa manage to put out an enjoyable record against expectations. Although Perpetual Chaos may not be the strongest record of the year and has its flaws, it is definitively listenable and continues the band's forward momentum apace. Worth a listen for fans of the band.

Written on 31.01.2021 by
omne metallum
Just because I don't care doesn't mean I'm not listening.
More reviews by omne metallum ››