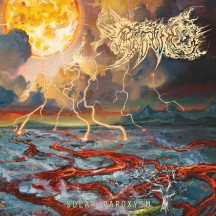 
A one-man black metal project with a Latin name could be a huge warning sign. Fortunately, with Portland, Oregon's cosmically themed Mare Cognitum, it is not the case. So grab yourself a Crowler of Ecliptic Brewing's Starburst IPA or Oort* Imperial Stout and rocket off to the lunar surface and beyond.

Solar Paroxysm (Paroxysm is defined as a sudden attack or violent expression. The more you know!) blasts off right away with back-to-back burners "Antaresian" and "Frozen Star Divinization". Both are escape velocity tracks, blazing fast to grab the listener's attention by the throat and ear holes.

The primary core of the music is the juxtaposition of a rampaging undercurrent of furious riffing and tikka-tikka-tikka "playing card in the spokes of a bicycle" drumming. Over this foundation glides tremolo-picked sweeping hummable guitar melodies that are a lot easier on the ears. The combination is a nice pairing that has worked for black metal since Zephyrous was still hanging out with Fenriz and Nocturno Teddo in Darkthrone. MC also toss in a few downtempo bars with thrashier chugga-chugga riffs to destroy any thoughts of impending monotony.

Vocals are fairly standard BM fare: rasped, reverbed and buried amidst the frenetic tikka-tikka-tikka's and riffing. Some variance is tossed in later with deep growls and roars, often paired and overlapping one another. Honestly, while nothing unique, it does work well.

After the quick one-two punch of the opener, Mare Cognitum slow it down to doom-ish speed with "Terra Requiem", which is great for showcasing both his creative depth - he's not a one-trick pony - and acts as a great downshift for the listener as well. Keeps things from getting stale. And if you think slow is boring, not to worry, MC stomp the gas pedal for the remaining pair of barnburners.

As for creative depth, Jacob Buczarski has serious chops and pretty much every track sees him soloing over the second half, a mix of some more traditional shreddery combined with measures that see him doing explorations vaguely reminiscent of Krallice.

Most of the time when reviewing something on 2nd or 3rd listen, words, structures and themes start to crystallize and take shape. With this one, it has been one of those albums I have had a difficult time pounding out words to adequately describe. So, this means rather than the normal 7-10 listens an album might get over a week, I've orbited around this one closer to 20 times. Words have been difficult to come by, but at no time during this process has the notion of pressing "play" filled me with dread. I've enjoyed each spin. So clearly that says more about the quality of the album than my failed attempts at wordplay and lack of ability to come up with food metaphors or whatever.

*Love using Oort Cloud in reviews, combining with a brew in a review is just double-win.