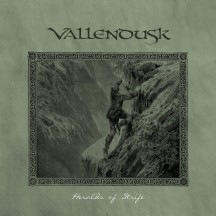 
01. The Last Soar As The Feathers Fall
02. Towards The Shimmering Dawn
03. Ethereal Echoes Of Devotion
04. Solivagant Heart
05. Marching Ballad Of The Unsung Ones
06. Immemorials In Eternal Slumber
07. The Sovereign


It's finally warm enough that I can easily go out without any jacket. Vallendusk are among the only black metal bands that can fit this weather.

I think it's no coincidence that Heralds Of Strife was released in late spring. When I reviewed Vallendusk's previous record, 2018's Fortress Of Primal Grace, I called it "among the warmest black metal albums I've heard", while theorizing that it might have something to do with the fact that they hail from Indonesia. And indeed Vallendusk might be among the only Indonesian acts that I know besides Kekal and an unhealthy amount of brutal death metal bands, but the way they manage to infuse that into their music in a way to make it sound just alien enough (by our Eurocentric standards) to sound exciting and just familiar enough to not be too challenging.

The black metal that Vallendusk approach is melodic and atmospheric, and when I say melodic I mean extremely melodic, I mean almost close to "melodeath" melodic. And in the wrong hands this would've made them the most unkvlt bands on the planet, and even though it flips the idea that black metal has to be cold on its head, there is still a lot of unrelenting force as much as the music is upbeat and shimmery. It has more in common with something like Saor or Deafheaven while also not really sounding quite like either a gaze, a screamo or a folk band despite taking clear cues. Ok, maybe you can make a pretty good case for folk.

Vallendusk make sure to inject just enough pure black metal elements, from some of its riffs, the vocals that sound like a whirlwind in a storm, a lot of the blasting, but most of the heavy lifting in terms of preserving the black metal feel of it lies in the production, which somehow manages to find the perfect balance between the airy feel of the melodies, and a rawer and harsher tone that makes it sound unrelenting in its warm way. You can get harsh weather in warmer climates too. And it would be even more blistering if the melodies weren't so goddamn majestic, or without those cleans on "Ethereal Echoes Of Devotion".

Vallendusk still manage to thrive on their unique sound, finding their niche of sundrenched melodic black metal, but what really keeps them afloat is the way they manage to fill all those long songs with compelling melodies. With no song shorter than 7 minutes and the entire album passing the hour-long mark, you'd expect it to feel a lot more overextended than it is.

Written on 27.05.2021 by
RaduP
Doesn't matter that much to me if you agree with me, as long as you checked the album out.
More reviews by RaduP ››