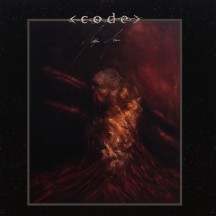 
Now this is a comeback album.

I mean that in two ways. The first and obvious one is that there has been quite a while since Code's previous record, 2015's Mut, and even though two EPs dropped in 2017, those mostly dealt with re-recordings, so hardly what would fill the years. Of course, six years is hardly what you'd call a long hiatus, but it was enough for me to go "Oh, that's a name I haven't heard in a long time" when stumbling upon this album. But the second way that I mean that this is a comeback record has to do, once again, with 2015's Mut. If you remember, that was a pretty different record for Code. The band had some pretty big lineup changes around 2010, and prog rock and post-rock influences were sipping in already, but they completely pushed the black metal out on Mut. Easy to see how that would make it a controversial and divisive album, quite like being Code's Watershed. Flyblown Prince is pretty much the "return to form".

I put that statement between quotes mostly because I found Mut to be a pretty good record, even if that might have to do with it having been the first Code record I heard. But, you know, maybe I shouldn't put it into quotes. Flyblown Prince is a return to form, not just to the sound that made Code. This isn't a good album because it is a progressive/avant black metal album. And not only because it acts like a bridge between their first two and their previous two records. It is because the jagged flair of the black metal feels so discordant and dramatic in a way that feels in line with all of the lineage of this type of progressive black, from Arcturus to Hail Spirit Noir, and from Dødheimsgard to Virus. It's so well crafted that it dispelled any feeling of doubting its authenticity as a return to a more successful sound that I may still have harboured.

Of course there are some things that act to the album's disservice. The mixing is pretty questionable and flat to say the least. And some Code fans might not enjoy anything that doesn't have Kvohst behind the mic again. Wacian's clean vocals have been part of the reason why Mut's reception was less than stellar, but I feel like here they are integrated much better and offer a bit of that theatrical feeling I've come to associate with the sound, even if his cleans are among my least favorite. It's not just the clean vocals, but a lot of the softer sides of Mut do find a place here, but they're in places where they make sense, offering an even more welcome contrast to the aggression. It's like black metal taken through a fever dream, from the dreamlike quality of some of its riffing to the almost impeccable flow of the album.

To say that this is the best Code album since Resplendent Grotesque would be an understatement. I don't think Code can ever match those records in the future. But if Flyblown Prince shows us anything, is that it shows that Code is band still worth being excited about.

Written on 17.07.2021 by
RaduP
Doesn't matter that much to me if you agree with me, as long as you checked the album out.
More reviews by RaduP ››