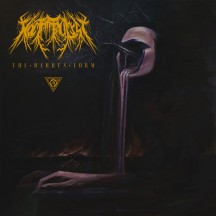 
In the time it took Noctambulist to release a second album, they've already gotten some pretenders.

I'll have to admit that when Elegieën dropped, I though it was this Noctambulist, especially based on the The Faceless-esque cover art. But now we actually have two "Noctambulist" albums in one year. Both are pretty great. But this is a review of The Barren Form. I'd like to think that I chose to cover this one not just because I also covered their debut, 2019's Atmospheres Of Desolation, but also because it's a worthwhile album. And the more I listen to it, I'm more and more convinced that that's the case.

The one thing I had to complain about Atmospheres Of Desolation is that it was too short, not even hitting the half-hour mark. Now we can all rest easy, The Barren Form is at a proper 43 minutes, which is *chef's kiss* for me. Of course, there are more differences between the two release other than the fact that we don't have to debate whether The Barren Form is a full-length or not, since it's also an improvement on pretty much every other front too. Ironically, this one has an even bigger emphasis on atmosphere than the one that literally has "atmospheres" in its title. It's still far from the Portal-esque type, and it still lingers very close to Ulcerate, but I feel like Noctambulist are pulling more effort into forging their own sonic identity, both by incorporating more blackened shrieks and by the atmospheric emphasis being approached a tad differently.

The album is highly technical, but it feels like they're more reserved about how that technicality should be used to further the music. Instead of just cramming as many notes and pace changes as possible, the intricacies know how and when to make the music feel more angular and obtuse. The dissonance is also merged with a cleaner mix that unfortunately feels a bit flat at times, in that it sounds pretty great in the ambient sections (there's plenty of good ones) but makes the guitars in the chunkier parts lack the proper punch, especially compared to the drumming. But I can't say that it's atrocious or ruins the experience. At least the bass is properly muscular. Mixing aside, the songwriting on display is fantastic, and there are few albums out there that can so seamlessly joggle between ambiance and brutality. There's been significant growth in that regard since the debut, and I can only hope that gets honed even further.

Quite simply, Noctambulist's sound on The Barren Form is too massive to be properly contained by the mix. It's like a coat of relentless battery over my ears.

Written on 31.07.2021 by
RaduP
Doesn't matter that much to me if you agree with me, as long as you checked the album out.
More reviews by RaduP ››