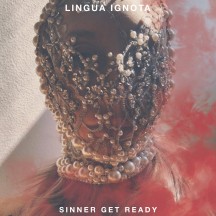 
01. The Order Of Spiritual Virgins
02. I Who Bend The Tall Grasses
03. Many Hands
04. Pennsylvania Furnace
05. Repent Now Confess Now
06. The Sacred Linament Of Judgment
07. Perpetual Flame Of Centralia
08. Man Is Like A Spring Flower
09. The Solitary Brethren Of Ephrata


If Caligula was the bloody revenge flick, Dinner Get Ready is the folk horror one. And it can also act as a drinking game where you take a shot every time "Jesus" is mentioned.

I was pretty excited for this release. I was a massive fan of both All Bitches Die and Caligula, having witness a performance from the former's tour and reviewing the latter. I can totally understand why Lingua Ignota has received all the hype and I am all for it, especially given how Caligula pretty much exploded in some sides of the internet. That time in the spotlight was spent releasing a bunch of covers, creating Sightless Pit with members of The Body and Full Of Hell, and putting out a more classical inspired EP. But she also explained that her next work would be pretty different from what she did previously. Sinner Get Ready has all the makings of a Lingua Ignota album, while clearly trying to move on in some regards.

It makes perfect sense that this comes after Caligula for two reasons. First, it's almost impossible to top the masterpiece that was Caligula by doing the exact same things that Caligula did. "Survivor anthems" is something that I always associated with Lingua Ignota, and I can only guess that it would come across as something similar to typecasting if this was all Sinner Get Ready was about. Trauma is still extremely prevalent all throughout Sinner Get Ready, but there's a change of scenery and mood. Let's talk about scenery for a bit. I had a sort of a bitter taste after the first two promo tracks, "Pennsylvania Furnace" and "Perpetual Flame of Centralia". Especially the latter couldn't go ten seconds without mentioning "Jesus", while the former at least had the courtesy of waiting until the third line. I understood that this album would be different from Caligula but I damn well feared we'd just be getting creepy gospel, hence why I made the "drinking game" joke. So I put off listening to anything until I heard the entire thing.

Indeed, both those songs make a lot more sense in context. I think putting out both Jesus-y tracks first was a bit of a misfire, but Sinner Get Ready is less of a bloody abuse revenge fantasy. It's rural Pennsylvania with its Christian values and the worms that swirl beneath. It's the first couple of minutes from Blue Velvet, where you see just what lies beneath Middle America. Don't take my word for it, as someone who has never laid foot in the New World, but this pretty much suits what I imagine it to be like. So this is why it seems like Sinner Get Ready is more informed by Christian liturgical music and Appalachian folk rather than the usual death industrial noise. But then again, death industrial was prevalent in her first release and was already having a reduced presence on Caligula. Which is the second reason why it makes sense that this comes after Caligula, because it was already going in this direction.

There's less manic energy and mostly just pure dread. There are some moments that feel a bit more explosive, but mostly it just lingers in weirdo folk, droning organs, televangelist samples, and layered operatic vocals. In its strange way it's pastoral, but with the term completely turned on its head. All the digital meddling has been seemingly replaced by fully acoustic instruments, with some clear Appalachian influence. I've seen this described as the complete antithesis of Lana Del Rey and I couldn't stop thinkin about it since. This takes all the sunshine and the youthful beauty from Americana. And there's few artists but Lingua Ignota who can put that dreadful experience to tape. Never before has a banjo sounded this harrowing.

Satan is terrifying. So is God. And even more terrifying is blind devotion.

Written on 11.08.2021 by
RaduP
Doesn't matter that much to me if you agree with me, as long as you checked the album out.
More reviews by RaduP ››