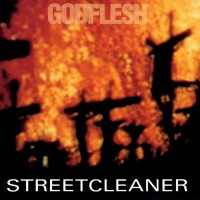 
Godflesh really hates humanity and Streetcleaner is the example that shows you the many failures of humanity. Seriously, if someone came up to me and said which is the evilest, heaviest, and nihilistic album ever made two albums come to mind: Slayer's Reign In Blood, and this album. This album is so unbelievably punishing that it makes even the most satanic death metal band at the time sound like fringe bands compared to this album.

For an album made in 1989, this was ahead of its time and one of a kind. It breaks the conventional characteristics of heavy metal and does something different. There is no technicality, no guitar solos, no long pieces of lyrics, and most distinctively no real drums and that's what makes Streetcleaner so distinct. The rhythm section is the biggest driving force in the music with G.C. Green's heavy bass playing, and the use of a powerful drum machine is the reason for this album's punishing nature. Just listening to "Locust Furnace" sounds so incredibly heavy for something that has little to no guitars. It has no verse-chorus pattern typical in regular music, the whole album is also about being repetitive so that the music continues as if the listener was a punching bag. Justin Broadrick's guitars are another distinct style. With the aforementioned lack of guitar solos, it relies on guitar squeals and sustains to bring disorientation towards the music. The guitars show you what hell sounds like when it's not relying on cliched satanism.

Speaking of hell, the vocals are the very definition of hell. In addition to Justin Broadrick's shouts, chants, and extreme vocals, he utilizes vocal effects to bring a disturbing atmosphere to some songs. One of the best examples of this is the title song, where the vocals sounded as if satan was speaking to you with reverb and deep extreme vocals. Incredibly haunting, and that's all I can say about the vocals.

The lyrics are incredibly short and to the point. It doesn't need a paragraph of lyrics to make this album extreme. With only a few lyrics written in each song Godflesh not only made something extreme, but it was also incredibly bleak. While the themes include overpopulation, greed, religious cultism, and corruption it goes beyond those themes. It's all about misanthropy. "Like Rats" is one of the most misanthropic songs of all time, same can be said about "Pulp", "Streetcleaner", "Locust Furnace" and so on. The album is bleak because it hates humanity and it does so with simplistic structures lyrically and musically.

As I mentioned before, Streetcleaner was ahead of its time and sounds otherworldly. This is one of my favorite metal albums in the 1980s and arguably one of the heaviest albums I've ever heard. Not only the album that defined industrial metal, but it's perfect for scaring off the most religious person, and a great escape for anyone who feels that humanity is a failure.

If you want to show anyone interested in metal what hell really sounds like, show them this album.
Written by Gothic Metalhead | 21.08.2021