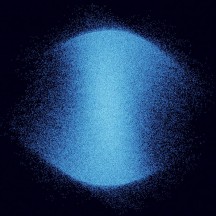 If Alcest were pioneers of the blackgaze sound, Deafheaven were the band that truly popularized it, with 2013's Sunbather arguably serving as the quintessential example of the subgenre. Between the crossover with more mainstream audiences that Sunbather found and the unorthodox image that the group presented, Deafheaven turned out to be a surprisingly divisive band within the metal world. Now, with Infinite Granite, Deafheaven appear to be striving to no longer be part of said metal world.

Deafheaven's sound across their albums thus far has seen harsh shrieks, relentless blast beats and blistering tremolo derived from black metal joined with shoegaze 'wall of sound' instrumentation and post-rock delicacy. After Ordinary Corrupt Human Love, the release of the song "Black Brick" as a single suggested that the band might be intending to further explore the 'black' part of blackgaze, but instead Infinite Granite sees the black metal consigned to only brief fragments of a handful of songs; this is a straight-up shoegaze/post-rock album, possessing all of the levity and tranquility of previous records but virtually none of the intensity.

There's moments where Deafheaven's past comes through, most notably in the last few minutes of closing track "Mombasa", a sequence of music that could easily have been found on Ordinary Corrupt Human Love, and the one sequence where George Clarke's screams are mixed in with the cleaner vocal approach he employs across the rest of the record. There's also blackgaze to be heard in portions of "Great Mass Of Color" and "Villain"; outside of these moments, however, the instrumental tones are gentle, the drums are restrained and Clarke opts for a sung vocal approach. The other songs on Infinite Granite aren't purely shoegaze; too much of the guitar work is inspired by post-rock for that to be the case. Having said that, those two sub-genres do have a large amount of overlap, and as such the sound of songs such as "Shellstar" and "Lament For Wasps" does feel very natural and singular.

So, what do listeners get on Infinite Granite? Well, there's gradual song progressions, lightweight quiet sections contrasted with walls of guitar layers, whether in a lower register or fitting the post-rock high-pitched tremolo template, and some of the signature lead guitar lines that Deafheaven have used in the past. There's brief moments outside of the blackgaze sections where there's a tad more heft to the instrumentation, such as in the mid-section of "Lament for Wasps", but the music feels very delicate pretty much throughout. The band can be both languid ("Shellstar") and slightly more up-tempo ("The Gnashing"), but there's never too much energy in the songs.

That's what Infinite Granite sounds like style-wise; how does it translate in terms of quality? Unsurprisingly, given that they've drawn heavily from the sub-genre in their previous work, Deafheaven know how to write good shoegaze. There are memorable guitar melodies to be found, and whilst the songs are sedate, they generally don't run for too long. On the flip side, Clarke is a decent vocalist for this style, and has some nice vocal melodies on the likes of "The Gnashing", but isn't quite a natural clean singer. I feel that the biggest challenge that Infinite Granite has, however, is that the change in style leads to a change in competition; when Deafheaven were a blackgaze band, there weren't many rivals of note, and as such their releases were typically landmark efforts in the subgenre (I like both New Bermuda and Ordinary Corrupt Human Love very much, and although I'm not a fan, I can respect what the band accomplished on Sunbather).

In contrast, Infinite Granite puts Deafheaven in competition with other shoegaze bands, of which I've encountered many in the past couple of years thanks to the non-metal article series. Songs such as "Great Mass Of Color" and "The Gnashing" are compelling, but overall I feel that the album is unexceptional when placed alongside recent efforts from the likes of Hum, Dust Moth, Radio Supernova, Kairon; IRSE! and others, with a couple of tracks that are too understated for their own good and not quite enough moments of euphoria to elevate the album. One frustrating aspect of Infinite Granite is how "Mombasa" shows that this new approach can be successfully integrated with flashes of their former blackgaze to good effect, but this isn't really explored further elsewhere on the record.

Infinite Granite is an album that will add fuel to the fire for those that denigrate Deafheaven, and may cause a split in their existing fanbase. Ultimately, it's a generally successful shift in a direction that leaves metal very much as an afterthought, and the band retain the ability to write touching melodic music even when that extreme contrast has been taken away. However, I do find it a bit hard to feel particularly strong about the album, whether positively or negatively; if this is a permanent change in direction, hopefully Deafheaven will be able to improve on subsequent efforts, because it would be a shame to see one of the key acts in one genre be relegated to a middling member of a different genre.

Written on 22.08.2021 by
musclassia
Hey chief let's talk why not
More reviews by musclassia ››