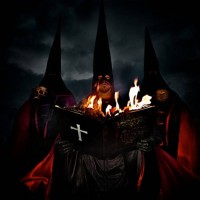 
Cult Of Fire are unlike your usual black metal acts; they do not show any themes around the acknowledgement and praise of Satan, there is no sign of the inverted cross, or any sign of the sigil of Baphomet. Don't get me wrong though, they still have a strong anti-Christian vibe about them, much like most other black metal bands, but instead they rather embrace the idea of showing their own ideology and beliefs, primarily on Hinduism.

Triumvirát is an album that shows less of the Hinduism theme, as it is only their full-length debut album, but the theme becomes a lot more apparent later on in their discogrophy. Their theme is carried out not only by their lyrical content and album covers, but also in stage themes; the robes you see them wearing, like on this album cover, may look intimidating or deliberately controversial, but they tend to wear these as a form of their band's identity, not just to provoke a bad reaction.

What is first most striking to me about the album Triumvirát is how they manage to create such a dark and sinister atmosphere that sounds pure evil as hell, whilst maintaining one of the rawest forms of sound in black metal. This quality of raw production has been a part of black metal since the beginning of the first wave, first introduced by bands such as Bathory, and then becoming used in an even more effective way during the second wave, by bands such as Darkthrone and Burzum. These bands helped contribute to the Norwegian scene, but even today there are black metal bands that continue to use a raw-sounding production in the same way; Cult Of Fire have done exactly that on Triumvirát, and as the harsh, raw, uncomfortable-sounding production may not be to everyone's taste, the result is both a sinister and evil atmosphere.

With the production aside, I found the album surprisingly melodic, and with an epic sound, unlike the usual sound that you would expect black metal bands to have with this kind of rawness. There are some great riffs as well, with just the right amount of catchiness to keep you hooked, but importantly the catchiness is not too overdone, so that the melodies don't spoil the menacing, sinister atmosphere the album creates.

The tempo has the usual ferocious pace you would expect, with relentless blast beat drumming and tremolo guitar picking, much like the style you would hear from the bands of the early Norwegian scene. However, the songwriting has a real epic feel to it, which is quite unusual, differing from the overall sound of those bands.

The vocals are amongst the harshest I've heard in black metal, and were really hard for me to digest at first listen. It wasn't the fact that the lyrics were in an unfamiliar language to me, one I find difficult to understand; that isn't an issue to me, because I like the music, and there are a lot of albums I like to listen to where I don't completely understand the lyrics. Instead, the vocals were hard for me to get into because I found them very overpowering; they reminded me somewhat of when I first heard the vocals by Gorgoroth, but just as I found with Gorgoroth, I warmed to the harshness of the vocals, and I no longer see the vocals as an issue; they just add more of that sinister sound to the album.

Overall this is a good album, and I would say their best album to date, although some would argue their second album मृत्यु का तापसी is the best; it's all personal opinion at the end of the day, and I understand it won't be to everyone's taste, but I would recommend it to the old school black metal fans.