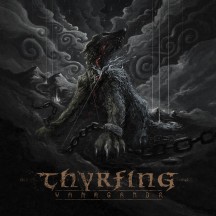 
It's been a long time in the making; will fans be satisfied by Vanagandr?

This album is the first released by Thyrfing since 2013, when De Ödeslösa found its way into the world. De Ödeslösa was my first (and before this album, only) experience with Thyrfing, and was an album that I found at the time to be moderately moving and catchy, if perhaps lacking in excitement and variety. It had also been the band's first album for 5 years when it first dropped; since the prolific early years of the band, the release of new music has slowed down substantially. Whether fair or not, there's naturally an added air of anticipation for albums that come out after a prolonged absence when compared with more frequent releases, so Vanagandr has some expectations to live up to.

As mentioned above, I'm not an expert on Thyrfing, so I had a quick check of some of their previous songs to see how they've developed over the years, noticing a shift in the role that the synths/keyboards have played in the band over the years. The very bright synths right at the forefront of albums such as Valdr Galga seem to have dialed things down over the years, and that continues even more so into Vanagandr, as the keyboards and orchestral synths spend stretches in the background, appearing semi-regularly to add counter-melodies or accentuate certain sections rather than overlaying whole tracks. I find this works well on the album, with the string sounds that weave in and out of "Undergångens Länkar" nicely elevating the moments between vocals. Even on songs where they're more obviously ever-present, such as "Fredlös", they lie more in the background, fleshing out the mix with some nice string sounds around the guitars rather than dominating the soundscapes as perhaps on early records.

With the keys and synths less front and centre, the stage is clear for Thyrfing's Viking metal to come through clearly. Having read a couple of other reviews of this album, I've seen the band's sound described as 'plodding', and I would be inclined to agree; many tracks amble along at slow-to-mid tempos, with understated riffs carrying subtle folk melodies inside blackened tones. On top of these riffs are semi-regular guitar lead melodies, perhaps more frequent than on past records; in several instances, I found myself hearing quite a lot of Amorphis within those melodies, particularly during the rousing climax of "Jordafärd".

Capping all this off are Jens Rydén's vocals; arguably the most notable element of De Ödeslösa, and certainly the thing I remembered most clearly about it when I read about the impending release of Vanagandr, were the high-pitched vocal cracks that popped up quite frequently on the older record. Whether that was a stylistic choice or accidental when recording De Ödeslösa, it doesn't seem to be something they were eager to preserve this time around, as I haven't really noticed these cracks occurring whilst listening to Vanagandr. Although they gave some memorability to De Ödeslösa, I think their absence here is probably for the best.

That's the main building blocks of Vanagandr summarized; how do they translate in terms of the quality of the songs? As aforementioned, De Ödeslösa was an album that I found pleasant to listen to, but it didn't quite do enough more than that to really stand out. I think Vanagandr is a bit more consistently memorable and engaging than its predecessor; the melodies that Thyrfing use are reliably enjoyable, whether coming from the synths, guitars, acoustic guitar sections or even occasional clean vocals, and the songs are well-structured to maintain some momentum, with opener "Döp Dem I Eld" managing to build and sustain some tension as it ebbs and flows between slower, ponderous sections and more up-tempo bursts of drumming.

These bursts of energy are welcome from my perspective; when I described the album as plodding above, it wasn't meant in generally negative way (if anything, some of the music here sounds to me like what Moonsorrow might do if they tried to write 5-minute songs instead of 15-minute ones), but a few tracks here do reach the point where they start to drag (with "Rötter" and "Håg Och Minne" perhaps the worst offenders). Although there were times when I found Vanagandr to be a bit of a grind, when Thyrfing get it right on this album, they make some lovely sounds. "Fredlös" has some very nice guitar leads and acoustic sections, as does "Träldomsord", which has quite a grandiose ending with 'dirty' sung group vocals and atmospheric drumming. Saving arguably the best for last, "Jordafärd" follows up an otherwise doomy trudge with an even more grand conclusion, guitar melodies, rasps and dramatic soprano female vocals all overlapping impressively.

Without completely fixing what made De Ödeslösa to be a good but not great album in my eyes, Vanagandr does improve upon its predecessor, even if the overall sound of the album is perhaps less distinctive than what is found on some of their other records. I can't guarantee that this will live up to the expectations of Thyrfing fans after so long, but it's a record that folk/Viking metal fans should find plenty to like about.

Written on 30.08.2021 by
musclassia
Hey chief let's talk why not
More reviews by musclassia ››