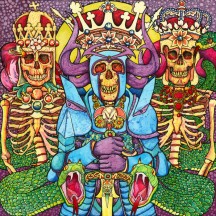 Listening to The Silent Bell Toll for the first time immediately had me thinking of my Green Druid review of last year, as I could tell straight away that I was listening to something with similarly enduring potential. That's not to say I've not enjoyed other new stoner metal bands that I've found this year; I've gotten satisfaction from the likes of Vokonis and Domkraft. However, there's something about the way that Terminus make music that really hits the spot for me.

How exactly they make music does vary somewhat during The Silent Bell Toll. The thick sludgy brooding nature of "Dying To Breathe" isn't that far off some of the material from Green Druid's At The Maw Of Ruin, with powerful swinging grooves contrasted with powerful atmospheric musicianship. In contrast to their fellow Americans, however, Terminus opt for a purely clean vocal approach, ranging from more classic hazy vocals to a higher-pitched tone that pierces through more directly. That more piercing singing style gets a chance to shine on the more classically catchy simplistic "Black Swan", a very easy-going song with an easily memorable chorus. As much as I do prefer Terminus when at their more ponderous and expansive on The Silent Bell Toll, catchier tracks such as "Black Swan" are pulled off nicely.

Still, it's when the powerful lower-end riffs, more expansive segments (which get a chance to shine by themselves on the lovely instrumental "Origin Of Fossils") and accessibility-inclined sensibilities come together that I find myself really enamored with The Silent Bell Toll. The tracks that these merge best on are "The Lion's Den", which counters some forceful doomy grooves with a lush backdrop to the guitar solo, and the title track, which tastefully builds tension during the verse prior to the melancholic chorus, subsequently moving into a hefty bridge. The record is capped off with the ambitious 10-minute closer "Oh Madrigal", which in contrast to the dynamic pacing of other songs, sticks quite consistently in 'slow and heavy' mode in order to deliver an emphatic conclusion to The Silent Bell Toll. It briefly cuts away before rebuilding to a grand climax, not unlike "Apparitions" by Tribulation, but if it was stoner doom.

There's nothing crazy about the formula on The Silent Bell Toll, but there's something about the way that Terminus bring everything together that clicks oh so nicely for me. It's got a great mixture of heaviness, melody and atmosphere that is accentuated by a production job that adds power to the lower end without pushing towards the kind of crushing intensity that might undermine the lighter sensibilities of the band. With this being their fourth album, it's taken a while for Terminus to pop up on my radar, but I'm already excited to see where they go from here.

Written on 01.09.2021 by
musclassia
Hey chief let's talk why not
More reviews by musclassia ››