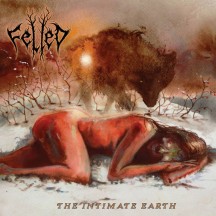 
Do you miss Agalloch? Do you like Dead To A Dying World? Do you enjoy Cascadian metal? If your answer is an emphatic 'yes' to any or all of these three questions, keep reading.

Hailing from Oregon, Felled is a folk / atmospheric black metal quartet featuring former and current members of bands like Cerridwen, Poet, and Yob. Their debut album exudes an atmosphere of aloneness and of wandering through desolate, snowy landscapes like the wolf on Adam Burke's cover art does, with the faint light of the sun setting in the distance. There is a beauty and the beast element in the music, again depicted on the cover through a dead and frozen face that belongs to an otherwise healthy-looking, naked female body.

Despite opening in furious mode with "Ember Dream", dramatic twists and turns take place in The Intimate Earth with the mood being not just aggressive but also desperate, mellow, and melancholic, depending on the tempo and the use of vocals and melodies. The deep growls have a way of sounding haunting and demonic, and there are also gently nuanced appearances of female vocals on "Fire Season On The Outer Rim" and "The Salt Binding" that add delicate hints of exquisite flavour.

The violin and the viola reign on the album almost acting as lead guitars, but without sounding overwhelming. The lead guitar is still very present and some of the best moments are when it is taking turns with the other stringed instruments in playing captivating melodies. Featuring five songs and clocking in at just over 40 minutes, The Intimate Earth sometimes feels like the songs following the short "Ember Dream" would be benefited by some trimming. However, there are enough moments in them to perch on and there are certain passages that become instantly memorable, most notably the intros of "Fire Season On The Outer Rim" and "The Salt Binding", "The Rite Of Passage" at 5'30", and "Sphagnum In The Hinterlands" at 5'10".

The production is on the lo-fi end, something that seems to have happened on purpose and, for me, it allows for the vocals and instruments to naturally coalesce into an emotionally gripping ordeal. I expect some people to find it too "muddy" though, especially as far as the drums are concerned but I believe the drums sound great and the person behind the kit does a fine job too.

What I really enjoyed about The Intimate Earth is that it is almost a visual listen; I can somehow picture the leafless trees, the frozen lands, and the wrenching loneliness through my headphones. Give it a try if you want to picture all that too.