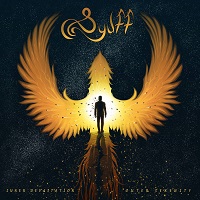 
A desperate call to escape into the invisible arms of the universe - humanity's last hope. Exactly what his Dudeness was looking for, man.

For someone who has been a member of the Metal Storm community for over a decade, I rarely come around to writing reviews. When I decide to write one, it's generally because the album has connected with deeply me or I believe the album serves as a greater milestone for future releases. In the case of Inner Devastation | Outer Serenity, it is both.

Sylff released their debut album in 2018 and were not listed in the Metal Storm database. It was only through my bizarre pursuit of science fiction-based progressive, death, and post-metal bands that I stumbled upon this diamond in the rough vis-à-vis metal-archives. Interestingly enough, Sylff is listed there as a progressive / post-black metal. However, they sound closer to progressive death doom, were it not for the intermittent tremolo picking and a few other elements they utilize.

The album opens with the aforementioned desperate call - a bilingual announcement from the UN that details the inevitable collapse of human society due to limited resources. The announcement calls upon nations to submit their remaining metal resources in order to build spaceships capable of traversing the known universe. Whether or not you enjoy the premise, the musical journey will keep you compelled nonetheless.

The first proper track, "Premier Envol", struck me with a nostalgic feeling, sounding like something akin to Katatonia's Brave Murder Day and early October Tide, yet with their own fresh post-metal sound. When the vocalist first introduces himself, you're immediately captured by the harsh, almost Opethian growl. However, what sold me as a listener was the tone and sound for such an unknown band. Throughout the record it's consistent, with melodic interludes and clean singing to meet the prowess of the growls. In fact, most songs continue with this same balance between the two, usually starting soft and building up throughout each piece. At the same time, there are enough clean interludes that help the band effectively shift gears, such as they did on "Sommeil Paradoxal". Additionally, the guitar rhythms and intermittent tremolo picking keeps the music at an exciting pace when you're ready to move back to the heavier sections.

If I could find a proper fault in this debut album, it would be the frequency of French spoken interludes. Regardless what you think of any language, I think spoken interludes in nearly every song becomes somewhat tiresome and repetitive. I believe the interludes may serve a purpose in the music; however, given the scope of the musicianship and concepts explored, I felt the band could have replaced one or two of them with another meaningful bridge. Next to this downside, "Songes Ineffables" has an interesting effect layered over the acoustic guitar that makes it sound distinct, but not necessarily in a good way. The effect they were seeking was to possibly make the sound somewhat dreamy, but it ends up sounding a little under-produced.

To end on a positive note, I would say this was truly a well-made debut album. As a listener, you can tell that the band spent plenty of energy on the concept, the writing, and the production. From there, I could only hope that the next album pushes this band further into the limelight.