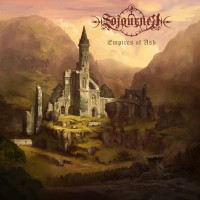 
Empires Of Ash is a solid debut album from the atmospheric black metal band Sojourner. The band are fairly new to the atmospheric black metal scene, but they have already made an impact, due to the epic fantasy theme they base their musical style on, which is much within the realms of Summoning and Caladan Brood. If your a fan of this particular genre, or either of these bands, then Empires Of Ash is clearly an album to look out for, if you haven't already.

Whilst listening to the album, it is evidently clear that Sojourner have been strongly influenced by the style and genre of Summoning and Caladan Brood; Sojourner even released a cover single of the song "South Away" from the Summoning album Let Your Mortal Heroes Sing Your Fame. However, there are many more influences to be heard, particularly when it comes to the album's folk sections; the main influence is Agalloch, as the style in which Sojourner play fits rather well with Pale Folklore. Along with Agalloch, Moonsorrow were also said to have been an inspiration, and you can also hear a lot of similarities between Empires Of Ash and Slania by Eluveitie, particularly in the folk sections where you can hear the use of the tin whistle; the vocal style is also very similar.

The harsh black metal influences are blended in together very well with the folk interludes, and the atmospheric soundscapes create a vivid picture of an endless journey through unexplored nature, capturing the wilderness through beautiful melodies and enchanting vocals. Chloe Bray herself stated that she wanted to be able to listen to Homeward Shore and be reminded of the Lord Of The Rings theme. The riffs and guitar tone were said to be influenced by the album Triarchy Of The Lost Lovers, by Rotting Christ, to give a dark and slightly gothic sense of melody and atmosphere.

The female vocals from Chloe Bray are a great asset to the album, and beautiful to listen to, particularly on the song "The Pale Host" written by Chloe Bray herself, which was about a description of an ancient Greek hero's burial. The clean vocals by Chloe Bray, together with the harsh vocals by Emilio Crespo, give this album a real beauty and beast feel.

Overall, Empires Of Ash is a very impressive album, the best so far in the Sojourner discogrophy, although it's early days as Sojourner are still a relatively new band. The atmosphere is majestic, and there is no shortage of beautiful melodies. The theme behind the songwriting may not be entirely orignal, but the way Sojourner produce this music stands out, making it worthy enough to be mentioned alongside Caladan Brood and Summoning.