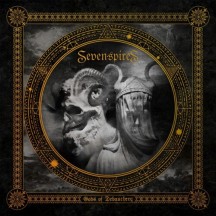 
Picture this: You are Seven Spires. You manage to be the a newer band that people care about in a God-forsaken genre that everybody* thought was pretty much dead. Do you: A) come up with a lean album that is all filler no killer and shows your best strengths; or B) come up with a 77 minute behemoth of an album that threads around being bloated?

Symphonic metal in 2021 is a pretty sad affair. And I know that there are a lot of people that still like it, and I'm sorry for people who are more into symphonic and power metal and folk metal whereas the rest of us seem to be so enraptured by death and black and doom metal and whatnot. But I do find newer power metal bands worth being excited about even today, as well as older bands I wasn't aware of. I can't precisely say the same about folk metal, but it's a niche that I can sometimes get behind. Symphonic metal though? Uhh... It's even weirder because, believe it or not, I used to be a massive symphonic metal fan around ten years ago. For a pretty good period of time it was almost all I listened to. Epica, Nightwish, Therion, Haggard, Within Temptation, Theatre Of Tragedy, Kamelot; I devoured all that shit. "Ghost Love Score" ranks pretty high in my favorite songs of all time. But even then I somehow showed very little interest in really digging deeper into more bands. Some things never change.

There is something that Seven Spires do right to manage to arouse interest even among people who didn't remain genre fans. Because, at its core, symphonic metal is a pretty exciting genre filled with unexciting bands. I mean, it's metal and it merges it with symphonic music, which are both things that I like. Hell, my favorite album of 2019 was a kinda symphonic metal album. Seven Spires do play around with genre conventions a bit, by toying around with both power metal and melodic death metal. Though growls in melodic metal is not really a new thing, it's usually at the hands of "the beauty and the beast" approach, which is so ingrained in the metal consciousness that I still see people asking about who does the "male vocals" on Seven Spires' albums. It's still Adrienne Cowan, and she even teahces us how (thank you Adrenne, I can now start my own band). But it's not like Seven Spires' music would not be as exciting if there was someone else doing the harsh vocals.

I suspect part of the reason why I like Seven Spires so much is that I secretly like power metal, but I'm disappointed in its inability to move past a certain flower metal sound. I like cheese as much as the next guy, and Seven Spires' music has a fair amount of that, but it's merged with bits of Kamelot (to the point of getting Roy "best vocalist in existence" Khan to guest on a track), Dimmu Borgir, Wintersun and Fleshgod Apocalypse, and beyond willingness to play around with sounds, there's an essential balance between taking the music seriously and not taking it too seriously. It's escapist fun, but it's also so convincingly passionate about the story it delivers and the musical embellishments.

And yeah, I could probably do without a couple of the more straight-forward moments just to cut down the album's runtime. It's not really unjustifiable, since it's not that far off from their debut's 64 minutes, but I would ki... I would be very giddy if this album would have been even leaner. But even as it stands, it's hard to think of any music in a similar vein that can get nearly me as excited. For what it's worth, Seven Spires can come up with a quadruple record. They can make the elseq of symphonic metal. I'll still eat it up.

* well not exactly everybody.