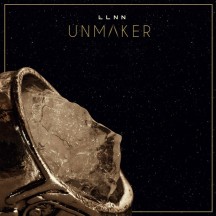 Based on the number of votes for their albums on this site, this review might be the first time you’ve heard of LLNN; I have been more fortunate, as after being introduced to the band in early 2019 at a local festival, I had the privilege of seeing them twice more in the same year. Across these three sets, I got to experience a level of crushing force that few, if any, bands have been able to match, and that visceral sound came through just as strongly on their previous album Deads. LLNN is the latest project involving Christian Bonnesen, who has also been involved with The Psyke Project and Piss Vortex amongst others; however, whilst those bands were fast and aggressive, being rooted in hardcore and grindcore, respectively, LLNN are intense in a completely different way.

LLNN rarely, if ever, push the tempo; instead, Unmaker trudges by at slow-to-middling speeds. The band is tagged here as post-metal, and it’s arguably an apt description, but their particular brand is abrasive and grim, rooted in a vicious industrial sludge sound. After 20-odd seconds of ominous noise, “Imperial” makes the perfect first impression on any newcomers to the band; it’s hard to describe the sheer explosive, volcanic force of the first riff on this album. It sounds less like a metal band and more like some kind of bulky industrial machinery. Across the rest of the album, even when it gets heavy, the band don’t always plunge to these depths of intensity; however, when they do, it’s a punch in the mouth that sends your neck into involuntary headbanging spasms.

I said in the last paragraph that LLNN are in some ways a post-metal band, which might be surprising considering there’s only one song out of 10 on Unmaker that runs over 5 minutes. However, whilst the album is most notable for its bruisingly heavy riffs and punishing barrages of sound, there is quite an amount of subtle dynamics here. “Imperial” itself alternates those crushing sounds with verses that are almost shimmering in tone, only to be intensified by Bonnesen’s pained screams (the vocals here, all extreme, are almost all in a higher register, save some disgusting growls during the breakdown of “Desecrator”). A factor that comes far more to the fore during the ‘softer’ moments of Unmaker is the synth work of Ketil Sejersen, who gets to play a larger role than he did on Deads. Whether it’s bleak ambient soundscapes in “Obsidian”, fleshing out the background to the moody rhythm section and clean guitar at the beginning of “Interloper”, or adding a bright sheen to the unusually euphoric “Forger”, Sejersen ably demonstrates what synths can bring to a band as uncompromisingly heavy as LLNN.

However, it’s not the light moments that make Unmaker so irresistible: it’s the riffs. Every song here (bar the interludes) chucks at least 2 or 3 killer riffs at listeners, all purpose-built for violent headbanging. Some of my favourites include the jaggedly hooky main riff of “Obsidian”, the relentless percussive trudge late on in “Scion” and the feisty outro to “Division”. Really, however, Unmaker is an album that does not let up; skip to any point on the album and you’re going to be subjected to infernal sludge that unleashes the primitive man inside you.

This is a band that really deserves more exposure, and I can only hope that Unmaker will give them that. If you’ve been sleeping on this band, add it to your listening queue; however, make sure to remove any easily smashable objects from your immediate vicinity beforehand.

Written on 23.09.2021 by
musclassia
Hey chief let's talk why not
More reviews by musclassia ››