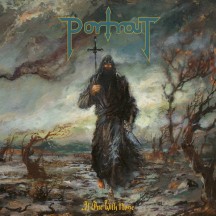 
The big release of September 3rd was of course Iron Maiden’s 17th LP, but on the same date came another album that deserves the attention of heavy metal lovers. It is Portrait’s At One With None and, tell me the truth, doesn’t this marvellous cover art by Adam Burke make you want to check this one out?

Portrait originate from Sweden and are among the bands responsible for the explosive reappearance of traditional heavy metal on the music map. One of the things I personally appreciate about them is that they are nothing like the myriad borefest acts that are merely playing a slightly more metallic version of generic hard rock; Portrait’s music is energetic heavy metal through and through, with some thrashier elements thrown in and even a few blackened twists. It is also quite dark and sinister, and strongly reminiscing Mercyful Fate and King Diamond, something that can be easily detected as early as the first notes of the splendid opening title track are heard. And it’s not that Portrait are trying to hide where their loyalties lie, given the name they chose for the band.

The first striking resemblance is, of course, the vocalist. Per Lengstedt has an impressive range and he can really hit the high notes but he does not overdo it. Confession time: I am an admirer but have never been able to fully stomach the King’s extravagant vocals even though I always adored the music of MF / KD. Lengstedt embraces the theatricality without becoming overbearing and thus his vocal stretches are not in detriment to the music; on the contrary, Portrait is one of the very few bands belonging in the new wave of traditional heavy metal that have a remarkable vocalist. In turn, Christian Lindell’s guitar work is also largely influenced by Denner / Shermann as well as by Andy La Rocque. In this album, you’ll be pleased to find big galloping riffs (“Curtains”), foreboding acoustic passages (“He Who Stands”), and wonderful twin harmonies and solos (“Shadowless”). I was so satisfied by all these layers upon layers of guitars and - oh my! - Portrait don’t have three guitarists; just one who does a superb job.

The songs are longer than what is expected for the style, with all of them but one stretching beyond the 5- or 6-minute mark but I seldom felt they overstayed their welcome. Apart from the songs already mentioned, the 9-minute epic, “Ashen”, is one of the highlights, building on melodies, having a clear destination, and maintaining an anthemic character throughout. Another personal favourite is the shortest track, “A Murder Of Crows”, with its sort of dissonant/blackened intro and outro and its amazing lead guitar work in the middle. Actually, one aspect that Portrait are excelling at in this album is how they open and close their songs. The only exception is the closer, “The Gallow’s Crossing”, with its ‘we-did-not know-how-to-end this-so-left-it-to-fade-out’ outro. In general, it is the one track that I possibly could have done without and would have preferred the excellent “Shadowless” to finish the album instead.

The mood and the songwriting are both so much of a throwback to the two bands I have already mentioned (along with some early Iced Earth and Iron Maiden moments here and there) that some people may steer away from giving this a full chance. The only other downside I found - and this is really an obstacle towards the enjoyment of this album - is the compressed production. The brickwalling that took place here is beyond my comprehension and it does not do justice to either the quality of the songs or the musicians’ performance.

Along with Hooded Menace’s The Tritonus Bell (review here), Portrait’s At One With None makes it so that we had two Mercyful Fate- / King Diamond-influenced albums released within a week and they are both really worth your while. Portrait are stepping up their game with their fifth full-length and it is about time people take notice.