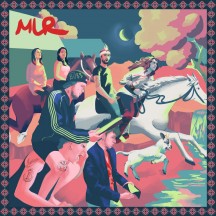 
My one major complaint about E-an-na’s full-length debut, Nesfârşite, was that it was too full a length. M.L.R. is a bite-sized blast of compact folk metal that I can dig on repeat, and holy hell, is it ever a party.

In a sub-20-minute venture demonstrating that E-an-na do actually know what EPs are for (not complaining, but Fascinathanatango was a whole 47 minutes), M.L.R., in the band’s own words, “tear[s] down the walls between two opposite musical cultures”. Those two cultures are metal and folk, which you are correct in observing have already been combined numerous times (by this very band, no less), but M.L.R. is a surprise release for more than just the circumstances of its propagation into the sea of Bandcamp. This album leans a lot more heavily on the modern side than your average folk metal encounter, to the point that I wonder whether E-an-na have been hanging around Dirty Shirt too much lately. If you don’t like Alestorm anymore but you still need slick, sexy folk metal delivered on a neon platter of club beats and proud pop pilfering, this video is your salvation.

The track enshrined in that video, “Malere,” is the clear highlight for me, bouncing into the annals of party metal history on fat nu metal riffs, but the whole EP takes the ultramodern twists advanced on older tracks like “Fiecare Gest Al Nostru” and “În Frânt” and dials the groove and hooks up to dangerously danceable levels. The stop-start chugging, intricate folk instrument runs, and coolly enticing vocal lines are constructured solely for the purpose of making you wonder what the hell decade you’re in and why the timelines converged right here in the middle of this bonfire. I bring up Dirty Shirt because their last album, Letchology, is my nearest point of comparison: Romanian folk music smashed into crisp, catchy, crunchy modern metal tunes that you can sing and mosh and throw sledgehammers at abandoned vehicles to.

When Jiana was first released, I remember being impressed by how fabulously snug the rhythms were and how tight the band’s sound was overall; each song was built on shifting sands that whirled around my ears as if trapped in ecstatic dance, but each instrumental line was still packed perfectly into place next to the others. Then there was Nesfârşite, which capitalized on that hypnotic power while incorporating more distinctly modern elements of metal, and then followed the Fascinathanatango EP, on which all conceptions of time and structure evaporated within a brain warp of psychedelic tango. M.L.R. flows like Jiana and the similarly digestible format puts these two EPs together in my mind, but you can also hear clearly how E-an-na’s free experimentation with numerous styles has carried them quite far in only a few short years; each of these four major releases has its own prevailing flavor and many little digressions, but each also takes a lesson from its predecessor. We wouldn’t be hearing M.L.R. like this without those previous ventures. While the strong musicianship has persisted all this time, M.L.R. sounds like the most fun E-an-na has ever had making a recording, and if there’s something we could all use right now, it’s a real cool time.