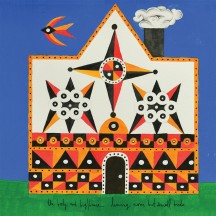 
The year is 2053. The Body finally managed to collaborate with every band on Earth.

On one hand we have The Body, one of the most versatile noise makers, going from sludge to drone to noise to industrial over their two-decades-long career. Even more varied that their own discography is their penchant for collaborations. From grind masters Full Of Hell, towering sludge vindicators Thou, hellish dronesters Whitehorse, industrial punks Uniform, omnious blacksters Krieg, and the post-rock-ers of Vampillia and Braveyoung. And I'm sure there's at least somebody I'm missing. Oh, they already released one album this year.

On the other hand we have Big Brave. Stylized as either Big ‡ Brave or Big|Brave. They didn't collaborate with anyone else hitherto. But they've had their sound shift through post-rock, noise rock, drone metal into a mix of something I like to call "anxiety metal". Oh, they also already released one album this year.

So we have two noise making bands who usually deal with drones and general unpleasant heaviness of the sort. They collaborate, and I think that no one, given the bands' backgrounds, would have expected that Leaving None But Small Birds would be a psychedelic folk record. But the result does make sense.

Ok, so we know what we got into. How do two makers of heavy oppressive atmospheres fare at creating a psychedelic mellow one? Well, the folk they approach is pretty traditional. The lyrics are collected from a pool of Appalachian, Canadian, and English hymns and songs, but reworked into a new narrative of marginalized hardship. The music strives to reach the country folk roots of The Band, and so it does, even if the result is a bit more psychedelic that that. So you have the minimalist drone-ing that both bands are known for, but used for creating a slightly different atmosphere. This is clearly a folk album done by heavy bands. The glacial slabs of guitar noise here instead work towards a sense of dejected psychedelia, oppressive less as a repeating pummeling wave, but more as the sense that downtrodden we were, downtrodden we shall remain.

The album varies in heaviness over its runtime, and though there are no points on it I would unquestionably call drone metal, there are few moments that don't clearly have that as a foundation. Deep somewhere under the violins and pianos, or in full view as a slumbering beast. But the guitars are more bluesy, the sound more earthy, and the vocals show the same emotional palette through hymns and murder ballads.

Written on 13.10.2021 by
RaduP
Doesn't matter that much to me if you agree with me, as long as you checked the album out.
More reviews by RaduP ››