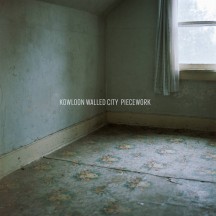 
Come to think of it, sludge always felt like an outsider. The metal but not really.

Ah, we're back at debating genres instead of talking about the actual music. I know genres are just arbitrary labels and social constructs, but they're really useful to understanding and packaging music. Kowloon Walled City is kinda sludge, with heavy riffing and slow atmospheres and a strong bass presence. But not really. You may have noticed that metal and its subgenres did not develop in a vacuum, and it kept interacting with the outside world, and other genres. Hardcore is probably the one with the biggest stocks in metal, with crossover thrash, metalcore, grindcore, and yes, even sludge, relying upon it. But hardcore also comes in post-hardcore flavors. And in the 90s, it too developed alongside slowcore, noise rock, indie rock, alt rock. Kowloon Walled City is the kind of sludge that feels more like the result of those rather than actual metal.

So am I trying to say that Kowloon Walled City are not a metal band? No, they definitely are, and them having a metal-archives page, while Between The Buried And Me does not, should be proof enough. But also they're not really. And not really post-hardcore or noise rock. And it's not like the sound on Piecework is incredibly diverse. In fact, it's pretty simple and streamlined. But none of those terms accurately describe it. It feels like it wouldn't exist without all of them. If it's heavy and brooding, it's in Piecework. Hell, even if it's just brooding, it's in Piecework. This is one brooding album, full of melancholy, frustration, depression, anxiety, and vulnerability. All the noise and the chaos of their earlier work is now stripped to its very core. A very minimalist approach to feelings that drag you down.

This comes with perks and drawbacks. A stripped down album is both more focused and less spontaneous. The yelling is more monotone, but Scott Evans' yelling is still the most instantly recognizable and emotional in all of sludge. Its heaviness and impact is now less concentrated in volume or chaos, but in tension and somberness. The moments with the most weight are actually the ones where there's a pause, where there's silence where there once was sound, only for it to return. There are very few albums in recent memory that make use of silence the way that Piecework does. And because of that, the contrast feels greater, and the album doesn't even need for its heaviest moments to be that heavy, because the contrast is already there. For a genre where riffs are usually swallowed by amplifier worshipping, Piecework feels uncharacteristically clean. It's the least noisy noise rock if anything. And it doesn't feel odd because of it.

All the increased sparseness works pretty well both because Kowloon Walled City are pretty good at it, having cultivated it over the years, but also because they knew exactly where to stop. The album's 32 minutes are just enough for it to say what it has to say, and not linger on more than it should. Any more, and it would feel tedious and monotone, and right now it's only marginally in danger of sounding so. While other bands are racing to see which is the heaviest, fastest, and noisiest, Kowloon Walled City carve another path.

Written on 25.10.2021 by
RaduP
Doesn't matter that much to me if you agree with me, as long as you checked the album out.
More reviews by RaduP ››