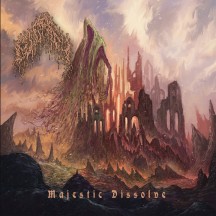 The purpose of the Clandestine Cut series is to shed light on what is happening in the underground, on unsigned up-and-coming acts releasing their demos and EPs before hopefully being picked up by a decent label (or continuing independent if that's what they want) and releasing full lengths. I really enjoy seeing bands we covered there finally making it to that stage. A bunch of those are death metal bands, since death metal demos and EPs seem to make the rounds. One of them was Conjureth (not to be confused with Conjurer), who released two ripping demos last year. But in retrospect, something was pretty wrong. They sounded a bit too experienced. Now, I finally got to see that some of its members have been around for a while.

So Wayne Sarantopoulos, who does vocals and guitars (and sometimes bass), is or has been a member of bands like Ghoulgotha, Encoffination, and Father Befouled, with some of the other members also having been part of Ghoulgotha and VoidCeremony. Oops. So yeah, with names like that, don't expect Conjureth to stray too far in terms of sound and songwriting quality. And if you're not familiar with any of those, first: shame on you, and second: that's meant to be a compliment. Everything about it does scream retro old school death metal, but the most important thing is that it's a riffing hurricane.

A lot of technical death metal throws riff after riff in a vitriolic fashion, but that's not something that is reserved for the technical side of death metal. Though the riffing here is not completely straightforward, finding ways to dip its toes into being both melodic and primal. It's choppy and violent, but Conjureth don't overdo it, they just make sure that Majestic Dissolve's constant barrage of foul energy doesn't sit too long in the same section or at the same pace. You know... riffs, but also a lot of how ripping this sounds is due to the way the riffs and the drumming work together to create an intense barrage. Hence why the album's mix is a less reverb-full bass-heavy one, but one that focuses more on said barrage. And such a huge emphasis, it's Conjureth's knack for writing punchy death metal that Majestic Dissolve stand out.

So, yeah, no wheel is reinvented. Just people who know how to do death metal doing death metal.

Written on 29.10.2021 by
RaduP
Doesn't matter that much to me if you agree with me, as long as you checked the album out.
More reviews by RaduP ››