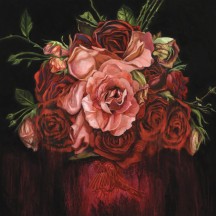 
Members of Horrendous and Crypt Sermon doing a... black metal album? Or is it a goth metal one?

The first thing to notice about The Silver is obviously the lineup. With the lineup being made up of bassist Jamie Knox of Horrendous, drummer Enrique Sagarnaga of Crypt Sermon, and guitarist Matt Knox, who is and was part of both bands respectively. And, to add a bit of a wild card, Nick Duchemin, who I haven't heard of before and can't find much about, doing the harsh vocals. The other things to notice come later, like it coming through Gilead Media, the flowerful cover art, questions about which silver does the band name refer to. But with a sort of supergroup status, black metal isn't really something you'd expect from this combination.

Sure, Enrique is also in Ashencult, but the guitars and bass also do a pretty good job of applying their progressive tendencies towards black metal as well. Sure, a lot of its black-metal-ness comes from Nick's harrowing shrieks, which are pretty much a perfect fit here, but it's not like everyone else isn't carrying the load of kvltifying the sound. But it's clearly coming from a less straight-forward direction. Either more progressive or post or melodic, but it's like the band is using black metal bits as pieces of a puzzle, but the way they're arranging the bits is only their own. It's a colorful album to say the least, and trying to find origins for the non-metal bits of the puzzle might be tempting, as you'd be sure to also find goth rock, death metal, and doom metal too.

Nick isn't the only vocalist at play, and Matt Knox' cleans offer a powerful and well-constructed contrast, often in the album's most gothic moments. And it's not just a contrast of styles in their vocal performances, but the tone and the mood shifts from tortured to assertive in a way that genuinely should not work as well as it does. It's the clean vocals which do come off ironically as the more potentially divisive of the two, as there are moments that feel a bit awkward. Sometimes more than a bit. The vocal interplay builds upon the instrumental interplay, shifting and contrasting moods and atmospheres, creating an immersive experience.

Tribulation and Unto Others are already doing their share in expanding the goth metal sound. A bunch of black metal bands are injecting goth rock in their sound. I'm not sure if I would call The Silver "goth metal", as I'm not really sure what to call it at all. But I don't remember interplays between goth and black metal sounds done quite like this.

Written on 29.10.2021 by
RaduP
Doesn't matter that much to me if you agree with me, as long as you checked the album out.
More reviews by RaduP ››