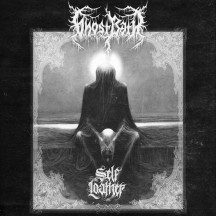 
The torrent of melodic tremolos and smattering blast-beats suddenly comes to a halt, and a cough pierces the silence, leading into a song flavoured by a woman’s agonised wailing. Not so much depressive as it is anxious, Ghost Bath mix varied composition and skillful execution with a very touching human… touch.

Self Loather doesn’t really contain a lot of music that I’d define as “depressive black metal”; in fact, there are so many elements from varying metal styles on display here that I’d be hesitant to even label it “black metal”, even if this is their obvious base of operations. I enjoy a lot of music that steps outside defined boundaries, be it in a progressive, avant-garde, or simply stylistically mixed sense, and this album is a great example of stylistic mixing. “Sanguine Mask” contains a wonderful motif built by a deathcore chug punctuated by Cascadian guitar hooks, carrying a multi-faceted vocal performance utilising hollowed-out screams, guttural growls, and reverb-drowned choral patterns. “Sinew And Vein” is made up of a beautifully danceable post-punk riff that eventually tapers out into an extended breakdown, in a “I wanna tap my foot while hanging myself”-sense, which is, of course, a trademark of any good music.

The use of acoustic guitar arpeggios and some really, really well-written neoclassical piano pieces popping up (for example in the outro of “Hide From The Sun” and most notably through the entirety of the solemnly pretty “I Hope Death Finds Me Well”) is just what is needed to break off the at times exhausting assault of anxiety with melancholic melody and, dare I say it, even a glimmer of hope. The lead guitar in general has quite a The Mantle (Agalloch, sillies) vibe to it, while the rhythm guitar often is content to chug out deathcore patterns in a way that does in no way come off as lazy or distracting, but adds to the “anxiety” factor to the music. Depression is to live in the past, and anxiety is to live in the future; moreover, anxiety rarely is as much a continuous state of mind as it strikes when least convenient, such as the panic attacks I used to endure a few years ago that tended to rear their ugly heads when most probable to make me have to get off the bus at the nearest stop only to have a change of scenery and then invariably have to spend half an hour waiting for the next ride (causing further distress).

There’s something about Self Loather that, even after quite a few listens, doesn’t connect with me the way I expect it to. Maybe it is the overly clean production job, the overtly American metal influences, or just the fact that I’m (Satan be praised) not nearly as depressed or anxious these days as I’ve been for most of my life… However, I recognise stellar, soulful music when I hear it, and Ghost Bath have got it in spades. I expect this album to be well-received across most of the extreme metal community, and it has a certain human quality to it that (while probably better conveyed with a slightly rougher mix) makes it simply impossible not to enjoy extensively. The combination of DSBM, Cascadian black, death metal, and neoclassica is performed with conviction, and is bound to convince many more listeners than me to have a nice, cold Ghost Bath in the waters of oblivion.

PS. Look at that cover art. I want it on my wall.