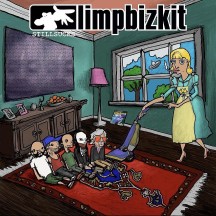 
How long are we going to keep calling it nu metal?.

It's always a depressing realisation when yesterday’s rebels become a nostalgia act; winking and nodding to their past infamy while finding a more comfortable niche towards the backdrop of the musical landscape. After the failure to turn back the clock on 2011’s Golden Cobra, Limp Bizkit make one of the most unexpected comebacks of the year, with the surprise release of their sixth album Still Sucks. It almost hits the nail on the head with its self-realisation and fan service before coming to a stop when it tries to take itself seriously.

To put into perspective how long the band have been going, twenty-four years from releasing their debut, Iron Maiden had just released Dance Of Death, which perhaps explains why Limp Bizkit are no longer raging about teenage angst and are instead embracing “dad vibes”.

What no one can accuse Limp Bizkit of is not producing some great drunken party music; from the chaos that ensues when “Break Stuff” or “Rollin’” plays, or the cheese-dripping, so-bad-it's-kind-of-good “Nookie”. When Still Sucks leans into this, it is at its best. The album is front-loaded with these tracks, with the four-track run from “Out Of Style” to “Turn It Up, Bitch” showcasing the album’s best moments and playing to their strengths. While not as strong, “Barnacle” and “Snacky Poo” are moments that will have you bopping along, though not reaching for the red baseball cap anytime soon. If you take it for what they are, then you will at least have a solid EP’s worth of fun to have here.

It’s a shame, then, that the rest of the album is not in this vein, either falling back into bad habits. Embracing their detractors, “Love The Hate” seemingly forgets that Limp Bizkit aren’t the whipping post band anymore, while “You Bring Out The Worst In Me” is a Deftones track that goes nowhere without style. Add into the mix the two slow, acoustic tracks “Don’t Change” and “Empty Hole”, that are about as out of place as Adele would be opening at a Gutulax show; acting like comedowns in the middle of a good time. While these are tropes of a Limp Bizkit album, it does mean this nostalgia trip contains the same pitfalls now as they did way back when.

Perhaps the biggest problem with the album is that Borland is underutilized, with no song providing any substantial or ear catching riff that could anchor a song like he used to. The tracks that do feature Borland have either uninteresting or bog-standard riffs that make you wonder if he was kept on the periphery in the making of this album. “Barnacle” and “You Bring Out The Worst In Me” seem like he was really phoning it in.

Was Still Sucks ever going to be an album of the year contender? Of course not, I expect even the band themselves know this, and to treat it as such is to miss the whole point of this album. Still Sucks comes close to hitting the mark when the band embrace their strengths and provide a soundtrack to drunken antics and songs that will make you mosh again like it's 1999. Unfortunately, the band doesn’t produce enough of these kinds of songs to make the album’s title ironic with its tongue in cheek to something that will likely be thrown in their face.

Written on 07.11.2021 by
omne metallum
Just because I don't care doesn't mean I'm not listening.
More reviews by omne metallum ››