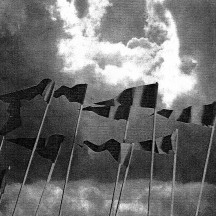 The diversification of black metal in the 21st century has really come down largely to the emergence of several local and regional scenes. While not quite as abstract as the French scene, or as cold and ethereal as the Icelandic, the Dutch realm of black metal has yielded some quite enjoyable entities n its own right, especially within the past 5 years.

Count Iskandr as one such entity, a duo composed of a drummer and a multi instrumentalist who have also played in a host of other Dutch bands including Fluisteraars, Turia, and Galg. Vergezicht is the band's third full length (and the drummer's first as an official member), a sprawling saga of black metal that is, indeed, best described as sunshiny. There are no chilly or haunting atmospheres to be found here. On the contrary, Iskandr craft black metal of a variety probably best listened to in a wide field on a warm spring day, complete with a spacious, airy guitar tone, relaxed, inviting melodies, and some quite impressive rhythms from the gentleman on the kit.

Without question, the most enjoyable aspect of Iskandr's sound lies in their sophisticated tempo manipulation. Far too much modern black metal boils down to an endless barrage of riffs and blasts, and while Iskandr certainly bring their fair share of momentum and uptempo bursts on Vergezicht, they also exhibit a commendable ability to pace their compositions effectively and let the music breathe a bit more with the midtempo approach as well. And it's during these slower segments that Iskandr truly shine, as they often see the band taking on an almost quasi symphonic air with their songwriting, utilizing magnificent clean vocals, acoustic guitar, and melodic interludes that really help to vault the music to a more transcendent level. "Gewesten Der Trij" and "Verbod" are just downright beautiful, and if Iskandr end up diving deeper into this type of sound in the future, I can see myself becoming quite a devoted fan.

Vergezicht may not be quite as out of the box as some of the other Dutch black metal out there at present, such as Urfaust, Laster, or the many projects of the notorious demon channeler, but what it lacks in experimentation it makes up for with a highly emotive atmosphere and just all around excellent songwriting. Nothing seems without purpose with Vergezicht, each moment instilled by Iskandr with an admirable sense of direction and confidence. With this album being as engaging as it is, and dropping hints of even greater things from Iskandr to come, I will definitely be anticipating whatever this duo comes up with next.

Written on 08.11.2021 by
Apothecary
Comforting the disturbed and disturbing the comfortable since 2013.
More reviews by Apothecary ››