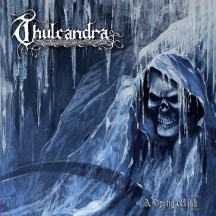 
At what point do we applaud utter dedication? Thulcandra's not-so-secret mission to continue Dissection's legacy has been well-documented with an unholy trinity of savory yet pestilent gems inked in blue and forlorn artwork. Fallen Angel’s Dominion, Under A Frozen Sun, and Ascension Lost. Now we are witness to the latest addition to the Dissection worship tinted with Entombed influences that is A Dying Wish. You may be thinking that this could be the one album too many. And you would be oh so totally wrong.

Apparently not fully satisfied with spear-heading Obscura - one of the world's premier technical death metal bands - Steffen Kummerer (guitars, vocals) is also the dark architect and main driving force behind Thulcandra. In this venture, he is expertly supported by Sebastian Ludwig (guitars), Christian Kratzer (bass, who sadly passed away in a tragic accident in 2020 prior to the album release) and Alessandro Delastik (drums).

Despite not hailing from Strömstad, Sweden - they are from Munich, Germany - Thulcandra are able to recreate the poignant atmospheres and twin guitars that made Dissection a distinctive band in spite of all the emotional-charged baggage linked to the activities of its former mastermind. As with its predecessors, the eery rebirth magic on A Dying Wish is as much in the songwriting than it is in the lyrics, song titles, and artwork. The cold wintry theme is a permanent feature and once more it is supported with another bleak and bluish death cover art.

With none other than Swedish legend Dan Swanö producing the album, the melodies featured on A Dying Wish just pour coldness down your veins with ice crystals clarity. And melodies are aplenty. Pick any track and enjoy the sensory overload. The title track does a splendid job at capturing the darkened essence of that aforementioned band. It is seriously one of the best things I have heard all year. Even beyond that, there is so much to savor; The sublime true-to-form buildup on the perfect opener that is "Funeral Pyre", the black'n'roll intensity and guitar brilliance of "Scarred Grandeur", the ultra-rhythmic "In Vain", the sure-to-become cult "Nocturnal Heresy", the onslaught that is "The Slivering Silver", the mellow bridge coupled with brutal thrash of "A Shining Abyss", or the perfect blackened death drive of "Devouring Darkness". Add a couple of folk instrumental interludes with acoustic guitars and you have one hell of a complete, impressive, well-rounded, and impossible to dismiss album. Further and plentiful listening sessions only elevated my opinion of the record.

Somebody might be looking down on this release from high-above with a most-pleased expression on his face. But one thing is for certain, looking at the calendar and seeing 2021 while being able to listen to such quality fresh blackened death is an intense emotional experience and a true gift. A Dying Wish cements Thulcandra as a special thing, an homage band who have the chops to make this kind of music as audacious and relevant today as it was ground-breaking back then. Dissection lives on, and their legacy not only continues but thrives through the works of Thulcandra.

Written on 16.11.2021 by
Dream Taster
Bringing you reviews of quality music and interesting questions such as: