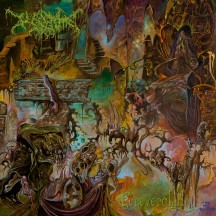 
01. Foreverglade
02. Murk Above The Dark Moor
03. Cloaked In Nightwinds
04. Empire Of The Necromancers
05. Subaqueous Funeral
06. Centuries Of Ooze


Doomy death's murk is something that has permeated OSDM for a long while now. It doesn't seem to stop. It doesn't need to. Not if you have bands like Worm.

I have a sort of hate/love relationship with old school death metal. I call it "old school" because a lot of it can trace its lineage directly to either Entombed, Bolt Thrower, or Incantation (or others). But in truth I find myself listening to more newer OSDM records than going back to the actual records that spawned them. Herein lies the conflict: I enjoy most of it, it makes me do that face you make when you hear a filthy riff, but it all starts to blend in my memory. Having reviewed a lot of it, I found that I was struggling to use different wording for each of them. I even self imposed a moratorium on reviewing the genre last year. Well, even if I still self-imposed that, I'd have to break it for a new Worm album. Even if I'd find myself reusing words.

I first found out about Worm through their previous album, 2019's Gloomlord, an album that instantly felt like a death/doom classic, as much as an album can become a classic in this rapidly changing environment. The band found a home in 20 Buck Spin, so they're in good company. Now when it comes to Foreverglade, I do feel some changes compared to its predecessor, namely it leans a bit more on the doom side, with longer songs and more atmospheric synthy passages. The pace moves pretty solidly from the usual doom death to pure glacial funeral doom. The biggest emphasis is on the atmosphere, but this doesn't leave it feeling one-dimensional and not focused on the actual melodies. As is the case: riffs and absurdly low growls.

And with such a big emphasis on atmosphere, the production job perfectly creates that immersion into lo-fi murky fields of desperation. This makes the moments where they seep into funeral doom still have a distinctive doom death flair, and the synths and solos create an even bigger contrast. Overall, this also shows why these albums work so well in the 35-45 minutes runtime range, because they don't waste your time and the impact feels more focused. And though most albums in this genre would be pretty cool as concise and murky packages, what sets Foreverglade apart is its expanded palette, both sonically and instrumentally.

Back when I had self-imposed that moratorium, I said I would only break it when Charnel Altar would release an album. Well, now they are. So I'm not sure how my reviewing of OSDM would continue afterwards. But what I don't have any doubts for is that, with bands like Worm, the genre is still pretty vital.

Written on 16.11.2021 by
RaduP
Doesn't matter that much to me if you agree with me, as long as you checked the album out.
More reviews by RaduP ››