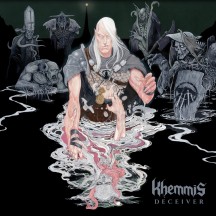 
"Doom metal" is a pretty large umbrella term. But Khemmis keep trying to cover more of that.

I'm not saying that there are moments on that feel like Deceiver drone doom or funeral doom or blackened doom. But Khemmis had already had a somewhat broad approach, with some groovy traditional metal inspired songwriting, emotional doom dirges, bass-heavy stoner sludge infusions. Some of those packed a punch and did hint at a more extreme direction too. And more so than ever, Deceiver finds Khemmis dragging their sound closer to death doom too. If without any context you asked someone "does doom metal have growls?", it would be a pretty difficult question to answer without diving deeper into what exactly you mean by "doom metal", in a way you would never have to question about the inclusion of harsh vocals in death, black, heavy or power metal. Like I said: large umbrella term. But even so, hearing harsh vocals in doom metal, even the more epic leaning kind, still doesn't feel unfamiliar in any way.

So what am I trying to get at? This type of doom metal had a pretty strong renaissance in the 2010s, bolstered by bands like Pallbearer, Procession, Atlantean Kodex, and Spirit Adrift (and many more). And Khemmis was one of them. None of those bands had really fallen off, but looking at the latest Pallbearer and Spirit Adrift albums, I can say that I have a slight feeling that there's a downward slope incoming. Not a gigantic genre ending one, but more of a "their best albums are already behind them" way. I was hoping Deceiver would prove me wrong. Instead, it leaves me a bit conflicted. It's a good album. Fantastic even. But I don't think I'd rank it above any of the other Khemmis albums. So it's in that sweet spot of not being good enough to put my fears to rest, but not being bad enough to confirm them once and for all. But in the end, so what? Isn't consistency good enough? The 2020s will have it's fair share of bands to release their best albums in that decade.

But why does an album as fantastic as Deceiver not immediately feel me with glee? Well, remember how I said that the band was pushing more into death doom territories? Even if only ever so slightly? Well, that's something I would normally be excited about. A band shaking up their usual sound by injecting more of a neighboring sound instead of just sticking to what they know best. But whenever the band moves into those territories I feel my excitement subsiding. Not to a grinding halt, but it's pretty clear that Khemmis are fantastic at writing epic emotional doom, and fairly decent at incorporating heavy metal or death doom. "Fairly decent". And it also makes sense that their most melancholic and slow album would have the most death doom influence, however that also has the unintended consequence of making the music more predictable and less exciting.

So you know what the biggest issue is? They set the bar too damn high with Hunted. And the slight disappointment of some of their peers put some unrealistic expectations upon Khemmis to continue as the torch bearers of that doom revival wave. And when I say that it's less exciting, more predictable, and only fairly decent at what it incorporates, those still feel like minor nitpicks once you shake away all that pressure to perform. Of course it's their most melancholic album. Look at what the world is going through. I don't care that they're not perfect at capturing that, they make me feel it. I don't care about those couple of moments where my excitement dwindles when most of the album still hits. As far as the epic clean vocals are concerned, I don't think they ever sounded this good. So there's that.

Written on 28.11.2021 by
RaduP
Doesn't matter that much to me if you agree with me, as long as you checked the album out.
More reviews by RaduP ››