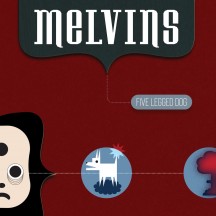 
Anybody wanna sign up for two and a half hours of acoustic Melvins songs?

Melvins is a pretty odd band. Having been around since the early 80s and pioneering both sludge and drone metal, and maybe even alternative metal and grunge, and God knows how many other genres. But even after the classic late 80s, early 90s era, they kept doing stuff that was out there. Collabs with Dead Kennedys's Jello Biafra, a collab with Lustmord, having two separate lineups by recreating an alternate version of their 1983 lineup (a lineup that also released an album this year, Working With God), an album with a dozen bassists, and just generally seeming like the kind of band that does whatever they want.

Now this review may or may not come out of King Buzzo scolding me in our interview that, even though he was doing the interview to promote Five Legged Dog, I hadn't listened to all of it. In fact, I had only listened to "Night Goat". But, in my defense, I'm not quite sure if Five Legged Dog is meant to be listened to as a whole. It's two and a half hours of acoustic versions of Melvins song. If you're thinking "Melvins are a band meant to be loud and distorted", they you're goddamn right, but that's also a bit reductive. You see, not only is Melvins' discography pretty vast and varied, but Five Legged Dog can stand on any of its five legs.

I'd be temped to say that this is both just a curiosity of a collection of most of Melvins' most significant songs having an acoustic version, so that now whenever you like a Melvins song, you can easily just go and check out its acoustic version as well; but also that this works so much better than expected and it goes to show that there is much more to Melvins' songwriting skills than the being loud and distorted part. Both are absolutes, and neither are completely true. But there's enough truth in both to explain Five Legged Dog. This does work better than expected, but not all songs work equally well when translated to the acoustic medium, and the colossal tracklist suggests that they wanted to do acoustic versions of as many songs as possible so that they only do this once and be done with this.

And for a band for whom the acoustic medium isn't something that feels as natural, the performances here are pretty great, from the blend of percussion and guitars, to the vocal harmonies (especially these), all in order to fill the lack of fuzz. A lot of care was clearly put into making this work as good as it does, instead of just playing the songs as they would, but on different instruments. You can kind of tell that there is some residual awkwardness, but a bunch of these could've ended up on any other Melvins album, and they wouldn't feel that out of place. And even if none of these are, to my knowledge, actually original material written specifically for this, there's also King Buzzo's debut solo album which takes a similar approach, but feels even more sparse. So I'm curious whether they may take some lessons learned from both of these and approach writing actual acoustic songs for whatever they come up with next.

So I suggest that instead of diving headfirst into a very long collection of a band trying a different medium. This is more like a Subway, with a bunch of ingredients. Go create your own Melvins acoustic album. Pick and choose whatever fits you. My favs are probably "Eye Flys", "Night Goat", "Halo Of Flies" and "The Bit".

Written on 15.12.2021 by
RaduP
Doesn't matter that much to me if you agree with me, as long as you checked the album out.
More reviews by RaduP ››