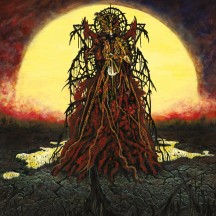 
Death metal has reached its conclusion. And Charnel Altar is just getting started.

Let me talk about my relationship with death metal. I love death metal, but out of all the genres that I reviewed, it's the one I feel the most like we're on rocky grounds. It's the only genre where I felt like I was repeating myself too often, and for a genre like OSDM that is pretty traditional, I can say that the albums themselves were kind of repeating themselves. But I love OSDM, and almost every Friday I got my fix of new OSDM releases. The sound was really in vogue for the past decade or so, and you got some labels that became quite specialized in it. I only started reviewing here in December 2017, and in October 2018, I was already reaching the end of my death metal vocabulary. That was the start of me wanting to review more death metal, but struggling to uniquely do so. I still reviewed death metal, but it reached a point when, in October 2020, I placed a moratorium on me reviewing death metal. I ended up breaking it once the year ended, because I still really felt like reviewing death metal. But I did try to at least play with things a little. I reviewed an album without talking about the music at all, and I wrote the same review twice. And to wrap everything up and bring this tirade to a conclusion, when I announced my moratorium, I specified: "I guess I need a break from death metal from a while. Call me when Charnel Altar release their debut."

I specifically reiterated my entire history with OSDM on this review, not only because my difficulty in uniquely describing death metal has lead me to constantly reference said difficulty in reviews, ironically making the reviews repetitive in a meta way, and thus I wanted to compile the entire thing once and for all; but also because Charnel Altar's debut feels like such a nice conclusion to a running joke that I feel like only I laughed at. I reviewed Charnel Altar's demo back in 2019, and then their split with Carcinoid, and for some reason I've been fixating on them ever since. Is it healthy? I don't think so. But when all was said and done, their debut was on the way, and I was terrified to listen to it. I actually hadn't listened to their demo in a while, and I was terrified by the thought that I've been fixating on this one band and their upcoming debut while talking about death metal, and then I might actually not like it. Well, I got the promo, I put on my headphones, and all my fears went away.

Look, I still find it hard to put it into words. I'll still listen to whatever new releases come out and feel giddy about them. But if I really wanted to distill what I really really love about the genre, I find it here. A lot of people may think it's about the riffs. Riffs are cool and I love riffs. But when I listened to Abatement Of The Sun, it's less of a "Wow, these riffs are cool" feeling. I don't think the performances themselves are really mind blowing, and neither is the songwriting especially mind-blowing. On my worst day, I might even call it just serviceable. And yet, Abatement Of The Sun is the best experience I've had with an album like this in a long while. And the most concrete way that I can put it is like this: it's the sound. A lot of bands might have cool riffs, well-arranged segments, sick growls, but if it doesn't "sound right", I'll immediately lose some interest. If the vocals seem mixed a bit off, if the guitars are too shallow, if the snare sounds awful, it won't be it.

In a way, as long as your album is between 30 and 45 minutes, and if it sounds right, I almost don't care what you fill it with. I'll dig. Obviously don't be overtly repetitive or do anything too out of character. It's ironic that I say that when Abatement Of The Sun of the sun is 47 minutes long, I know. I don't make the rules. It makes me grin for the entire duration.

Ok, but how does a band get "the sound"? I guess it's more of a "you'll know it when you hear it" thing. It's the thing that makes me try and think of nasty metaphors to describe it. Gurgling blood. Gurgling slime. Drowning in mud. Suffocated in a cave. Pressure chamber hell. Guts. Livers. Slime. Blood. Hell. Bleargh! A lurking beast beyond all human comprehension. The feeling of being completely powerless in the face of a fate worse than death. Two caveman hitting each others' heads with a cartoonish club. A bunch of pigs devouring a cadaver. A geyser spouting blood and slime and guts. The human condition. A body part lying in a field. A body slowly devoured by vultures. Maggots crawling through skin. The fear that love is not enough. A hand on your shoulder at night when you thought you were alone. That emptiness in a seemingly friendly face. An urgent email. Actual guts used as Holiday decorations. Ripping that annoying skin on your fingers but pulling too much of it. Hitting your toes on furniture. Getting crushed in industrial machinery. Retaining your conscience while you're getting surgery. Retaining your conscience while you're getting buried. Eating pies brought by your newly conquered vassals after one of your family members went missing. Sinking deeper and deeper into the ocean where no light can reach. Reaping the benefits of delaying a project until close to the deadline. Genocide on a scale it would make the most ambitious serial killer tremble. Smuggling tongues. Sleeping through your morning alarm. Having a bulldozer very slowly running over you starting from your feet. Death by a thousand paper cuts. A dark alley. A party where you don't know anyone. The actor from that show looking at you from your TV and reciting your full name and address. An endless cycle of waking up from dreams. Having two home intruders announce that they want to play some funny games. The constant dirge of time passing irreversibly. Remembering someone from your childhood that is probably dead now. A monstrous mutant beast screaming through the slime dripping from its mouth, but its voice is exactly your friend's. A new Six Feet Under got announced. The entire world slowly drowning in a dream. A comical amount of blood puke.

What this means for me and death metal? I probably won't bore you with the same story over and over. I don't doubt that death metal will keep pumping out great releases even if I don't necessarily write about them (but I totally might). I just hope most of them get "the sound" right. Charnel Altar did.

Written on 16.12.2021 by
RaduP
Doesn't matter that much to me if you agree with me, as long as you checked the album out.
More reviews by RaduP ››