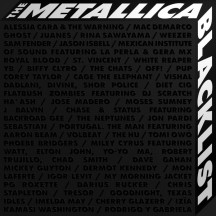 
I listened to a shitload of Black Album covers so you don't have to.

So... Metallica's seminal Black Album came out 30 years ago in a move that pretty much cemented their legacy in pop culture as "the metal band". It was a lot of folks' last good Metallica album, a lot of folks first bad Metallica album, but even more folks' first Metallica album. Pop culture has been celebrating Metallica since, with that 2003 MTV Icon show where their songs were covered by the likes of Sum 41, Avril Lavigne, Snoop Dogg and Limp Bizkit; plus they had that one show where they played a couple of songs with Lady Gaga. It's not surprising that Metallica's connection to the mainstream hasn't been very well received by most metalheads. And now for the 30th anniversary, a special tribute album was done where a bunch of artists covered songs from The Black Album. The only problem is that there's four discs of non metal bands covering Metallica songs. And I'm not sure if anybody asked for that.

To be fair, there's far more cases of metal artists covering non-metal tracks than the other way around. And if a metal album would get the massive tribute album treatment, it couldn't have been any other than Metallica's The Black Album. Like... what else could it have been? Could you imagine a similar tribute album for Slayer's Reign In Blood? We already have one cover and it's enough. Iron Maiden's Number Of The Beast? Rammstein's Mutter? What other metal album had this big of a universal reach? I don't even like the album that much, but I still can't deny its massive appeal. Of course this tribute makes sense.

But even if it does make sense, I can't for the life of me imagine someone actually listening to this for pleasure. You put this one on and you're greeted by six consecutive versions of "Enter Sandman", then seven consecutive versions of "Sad But True". Some songs are definitely more popular than others, and it's no surprise that "Nothing Else Matters" the ballad that is the least metal song on the record, had the biggest numbers, but nobody should have to endure listening to it again and again. And then you have the huge array of sounds on the record. Pop artists, indie artists, rock artists, hip-hop artists, jazz artists, country artists, punk artists. The odds of a listener finding all of these appealing are pretty slim. And I'm reviewing this for a metal website, and, to put it bluntly, this is not an album for metalheads. I'm not actually sure who the target audience for this is supposed to be honestly. I can imagine a bunch of folks on here not finding any of the songs appealing. And I don't want to appear snobbish by describing myself as open-minded and brag about how much broader my taste is, but even as someone who kinda is... a lot of this is not that good.

But a lot of it is good. Hell, a lot of this is fantastic. I don't think this was ever intended as a "plug in and listen to it all", but just like that two-hour-long acoustic Melvins album that I reviewed, it feels more like a Subway that offers you the wide range of ingredients for your own Black Album sandwich. You want artists trying to stick close to the original, artists sampling the original song into their own, and then reinterpretations into different sounds. All to varying degrees of success. And thankfully that also means some really worthwhile stuff. And, if I may say so, some versions I like more than the original. It probably helps that I was already a fan of a pretty big number of the artists involved, having covered quite a few already in our non-metal feature.

"Enter Sandman" has the most amount of bands playing it pretty safe and trying to stick pretty close to the original. Ghost are obviously pretty good at this, but Mac DeMarco and Weezer just make me morbidly curious to hear how it would sound if they came out with a metal album. And I don't think anyone in this world ever needs to sit through Juanes of all people trying his hand at it. Alessia Cara & The Warning's version is the middle-road between the rock energy of the original and their own pop sensibilities, and it works pretty well. But definitely the wildest of the bunch is Rina Sawayatama, which makes it sound like a proper industrial metal meets early 00s glittery pop banger. And that is just the first song.

I could go and try to compare each cover for each song, but I feel like that would be a pretty futile endeavor, because of just how much stuff there is here. So instead I'll just mention the ones that seem most interesting. Like Mexican Institute Of Sound and J Balvin both create Latin version based on samples, but the latter works really well, while the former is just hilarious. St. Vincent makes "Sad But True" sound like a smoother Nine Inch Nails song. Pup, The Chats, and OFF! create punk versions of "Holier Than Thou", and none of them really drop the ball, but OFF!'s is the one that really reeks of that rowdy energy. Other than J Balvin the best sampling happens in Flatbush Zombies' "The Unforgiven". Moses Sumney and Cage The Elephant both create more intimate versions of "The Unforgiven", but in different soundscapes, and I think Moses' works best. There's country rock versions of "Wherever I May Roam" and "Nothing Else Matters" done by Jon Pardi and Chris Stapelton respectively, the latter of which absolutely blows the original out of the water. There's a bunch of other pretty great covers of "Nothing Else Matters", like Phoebe Bridgers, Dave Gahan, and surprisingly also Miley Cyrus, but they don't quite reach that level. The Hu is on a Metallica tribute streak, and they could honestly just cover the entire thing and it would be great. Volbeat cover the worst song on the original album. Idles make "The God That Failed" into a pulsating post-punk monolith that might be my favorite thing on the entire record. Kamasi Washington's take on "My Friend Of Misery" is such a colorful jazz take on the original that it is contending with Idles for the best song here. And despite having listened to the original album for so many times, if my life depended on whether I could unquestionably answer whether Metallica have songs called "Of Wolf And Man" and "The Struggle Within", I don't think I could answer. So it's not surprising that the two are the most unpopular songs on the album, with only one rendition each, a cool alt-country one by Goodnight, Texas for the former, and a solid flamenco one by Rodrigo y Gabriela for the latter. The rest of the songs either made no positive impression, or I couldn't be bothered to give them a second shot.

So, I hope this can help you parse this unlistenable slob to get to the actual worthwhile stuff. Because hiding those fantastic Chris Stapleton, Idles, and Kamasi Washington so deep in this should be a crime recognized by the Geneva convention. For convenience, I created a playlist to act as my own redux, with stuff added in order of my enjoyment of it, with some slight adjustment to not place two covers of the same song too close to each other:

Written on 21.12.2021 by
RaduP
Doesn't matter that much to me if you agree with me, as long as you checked the album out.
More reviews by RaduP ››