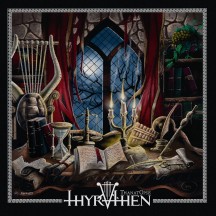 
This is the album that I want to experience live in its entirety at the Odeon of Herodes Atticus. One can only dream.

I won’t blame you if you have never heard the name Thyrathen before; I hadn’t either until very recently. The band’s mastermind, Corax S., used to be the drummer of a cult atmospheric black metal act of the ‘90s, called Jackal’s Truth. Music for Thyrathen was composed for the first time in 2011 but the recordings were never officially released. In 2019, A.Z. of Kawir fame joined the band on guitar and bass duties, and new music was written, while the older material was revamped. The line-up was completed by two legendary vocalists of the Greek black metal scene, Stefan Necroabyssious (Varathron, Katavasia) and Alexandros (Macabre Omen).

ThanatOpsis (from the words ‘thanatos’, meaning ‘death’, and ‘opsis’, meaning ‘spectacle’ or ‘view’) is a very theatrical black metal album. No, it has nothing to do with Cradle Of Filth and there are no keys or synths used here. Instead, there are Ancient Greek instruments, such as lyre, diaulus, and tympanum. There are also tenor and soprano choirs, male and female narrations, psalms, whispers, the whole deal. You know you’re in for something different from the opening track, which is essentially the parodos of Euripides’ The Bacchae. There is also another captivating vocal performance on “Flēbilis Moriendum (Μονωδία)”, on which we hear the most famous monologue from Sophocles’ Antigone. And, even though this monologue gives me goosebumps, being the diachronic symbol of youth that fights for dignity, stays loyal to one’s beliefs, and resists totalitarian power, I am in awe with how organically the narration blends with the music in the closing track, “Exodus - Catharsis”. Unfortunately, it is impossible for these three songs to be appreciated fully by those who don’t speak the language.

But ThanatOpsis is not just its lyrical themes of Ancient Greek tragedy, philosophy, and the like. The music reflects the tradition of the artists behind it by blending the raging melodicism of Varathron, the epic majesty of Macabre Omen, and the folk theatricality of Kawir. The atmosphere and songwriting style of Jackal’s Truth are also very much present. Some Rotting Christ-like melodies can be traced too, mainly on “Villa Dei Papiri (The Philosophical Library)”. The instrumentation and the way this album is presented make it so very gripping, and I find its atmosphere quite unique, especially considering that it has ignored keys and synths completely. The sound is impeccable, courtesy of Achilleas C. of Aenaon and Katavasia fame, every little sonic detail is clearly heard, and the mix does full justice to the songs.

Dissecting this wonderful work of art for a review is doing a disservice to its numerous facets and to its contributors’ massive effort. It is mentioned in the band’s bio that the material “has been written-rewritten, composed-recomposed, arranged & re-arranged” in different periods of their lives. This really shows; it clearly took a lot of work for this album to complete and this is why it's so fulfilling in every aspect. ThanatOpsis is meticulously made, full of lyricism, and it flows effortlessly. Its content needs no praise from me because it speaks for itself.

Put your headphones on, close your eyes, and imagine you have the best seat in front of the stage, back in 441BC.