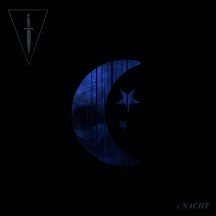 
The night comes after the fire.

(Dolch) are a German duo I discovered a couple of years ago thanks to their 2019 album Feuer, an album that instantly became a favorite of mine with it's eclectic ethereal gothic droning doom sound, the kind where you could plaster a whole bunch of genre descriptors on it and it would be accurate. Basically any reviewer's dream, but also any listener's dream with how compelling and entrancing it sounded. In retrospect, Feuer was already a pretty different album from its predecessors, being more directly doom influenced rather than drone influenced, but at that time it felt more like just needless genre fixture. Surely such a small chance doesn't have anything to do with the fact that Feuer was the first album of an ongoing trilogy of album, right? Right?

Well, the second part of that trilogy, Nacht, just came out, and let's just say that it puts Feuer into new perspective. What, at first, felt like a small shift in sound for (Dolch) gained a new conceptual dimension, as in it wasn't (Dolch)'s sound growing closer to doom, but (Dolch) manifesting the doom side of their sound for an entire album. And all of this is because Nacht does the same thing, except that Nacht is not a metal album. There's barely any metal in it, other than some distant droning distortion, but here ethereal gothic darkwave is the law. Taking everything from Slowdive to Dead Can Dance to Cocteau Twins to Fields Of The Nephilim, Nacht is pretty fitting of its name. Of course the dreamiest music happens when we sleep.

The shift in sound isn't that stark, considering that these are all mostly genres that (Dolch) have dabbled in before, but I doubt there were any songs of their previous to this that I could call "dream pop" the way that they work here, not do I remember any having as big of an electronic presence. The album still retains a trademark dark mysterious atmosphere, but there's an extended dimension for it that feels more upbeat and seductive. Despite having a pretty clear direction of having their sound without its metal parts, Nacht still covers a pretty wide array of sounds and moods, some more effectively than others, being both a curious case of a metal band shedding the metal, and a goth album by a metal band. There's elements of how well they're approaching these sounds and integrating new ones, and how much of their metal sound still lingers. If (Dolch) were not a metal band and this were their first album, I'd probably still feel compelled to write about it.

And I guess it will take the final part of the trilogy to come and have me re-contextualize both Feuer and Nacht again. So time will tell how the explorations here will benefit (Dolch)'s sound in the long run. In the meantime, we can only speculate as to how Tod will sound. Maybe neofolk? Maybe black metal? Maybe dark ambient?

Written on 10.02.2022 by
RaduP
Doesn't matter that much to me if you agree with me, as long as you checked the album out.
More reviews by RaduP ››