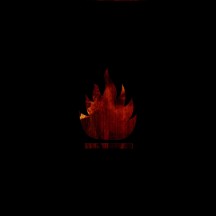 
I don't always check our new album recommendations thread, but if whenever I did I found albums like (Dolch)'s Feuer, I'd drop by more often. And I'm glad I dropped by that one time.

Feuer is one of those albums that come pretty late in the year seemingly out of nowhere and suddenly all of my lists have to get shuffled over because I have absolutely no idea how to properly take them in. It's one of those albums you could tag as gothic, or as drone, or as avantgarde, or as doom, or even as meloblack at times, and you wouldn't be wrong. (Dolch) are a mysterious German duo who apparently dropped out of nowhere, but have actually been steadily releasing demos, splits and EPs since 2014. For some reason their logo (that knife in a triangle) did give me a few King Dude vibes, but that's also likely because they actually did have a split with him, not only that, but also one with The Ruins Of Beverast. And having also performed at Roadburn in 2017, all of these without having released a full length album, you could say that they do have the seal of approval from a lot of places.

So despite the splits and the aesthetic, there isn't such a strong neofolk presence in (Dolch)'s music. Sure, it's there, but they're closer to the neofolk of Chelsea Wolfe than of Sol Invictus in this case, coming much closer to a very gothic sound, which isn't surprising considering the album title (German for "Fire", because everybody knows that German is the most goth language) and their bandcamp profile picture. Led by powerful and entrancing female vocals, they channel both that gothic neofolk and neoclassical touch and a very hypnotic almost dronish doom, so they're like Dead Can Dance meets Sopor Aeternus And The Ensemble Of Shadows meets Wolvennest, maybe just a bit of meets Portishead too. And all of it courtesy of a label like Ván Records and with promises of it just being the first part of a trilogy of albums, with Nacht and Tod (German for "Night" and "Death"), seems like there's plenty of more darkness to come from this front.

Despite all of the influences and genres I named, the music on Feuer doesn't sound too disjointed or all over the place, it's rather cohesive in a single sound, as complex and as interesting as that sound is, it's just a darkness that seems to have been approached by a lot of artists from different directions. The songs are long and hypnotic, at times a bit too long for their own good, but the production is so immersive and the layering so engaging that I wouldn't have minded if they were even twice as long. The vocals do give just enough lines that could be considered catchy to keep us from falling to deep in the state, sometimes in English sometimes in German, all of this under a wall of droning guitars and at times almost DSBM-ish lo-fi riffs and thick soundscapes. The lack of variation would be more of a detriment if it didn't sound so full and lush, but I have to agree that the first half of the album is significantly more immersive than the latter half.

There's a bit of cutting that would've benefited Feuer, but it's undeniable that the soundscapes on this record are absolutely mesmerizing at times, and even at their most bloated they still hold a lot of beauty.

Written on 21.12.2019 by
RaduP
Doesn't matter that much to me if you agree with me, as long as you checked the album out.
More reviews by RaduP ››