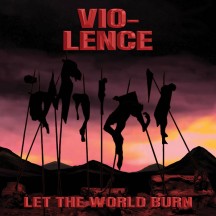 Oft remembered as the band where Robb Flynn earned his stripes before going on to form Machine Head, Vio-lence never got the dues they deserved aside from being footnotes in the history of thrash metal as a result of the classic Eternal Nightmare and for who some of their rank and file would go on to be. This legacy is two-fold, for Flynn giveth as much as he taketh, with his isolating and driving Demmel out of Machine Head providing the impetus for Vio-lence to thrash out like it’s 1987 again. His loss is metal’s gain, as Let The World Burn is an EP that harkens back to the classic sound during the golden age of thrash, giving listeners a dose of loud, nostalgic metal that is a breath of fresh air.

Although many who are not obsessed with speed and power might question what makes Let The World Burn any different from other thrash releases, those questions are drowned out by the intense noise of “Flesh From Bone” once you hit play. Vio-lence return with a sense of purpose and an axe to grind, sharpening said blade on some of the most cutting guitar work this side of 2020.

Machine Head’s loss of Demmel is metal’s gain, as his return to unadulterated thrash alongside Overkill luminary Bobby Gustafson is one that reaps rewards. Each track is a whirlwind of riffs and solos that combine the ferocity of the 80s Bay Area with the sonic advancements of the 2020s: a union that is a match made in hell. It was a pleasant surprise to find that Fear Factory veteran Christian Olde Wolbers was on bass duty herel not only does he live up to the hype his reputation provides, he isn’t buried in the mix and sits alongside the rest of the band, rounding out tracks like “Upon The Cross” with style and aplomb.

The production is tight, giving proceedings a firm and hard-hitting sound that complements the music perfectly, balancing everything while allowing each instrument space to breathe on its own. “Gato Negro” features a great bass tone that the rest of the track rests around, with its punchy drums and sharp guitars providing listeners with the perfect sound to enjoy these five tracks.

If there is a downside to the EP beyond it being too brief (I’d have killed for a full-length, given the quality of the material here), it would be that Killian’s work behind the microphone is somewhat of a non-entity; beyond the occasional passage, his presence is mostly a blur where little sticks out. His vocals are nothing special, but on a track like “Let The World Burn”, apart from the spoken word segment and chorus, I could remember hardly anything he sang, even with repeated listening. It is far from a deal breaker, but if you are someone who likes to sing along or are interested in lyrical quality, then Let The World Burn falls short in this department.

If you ever needed a reason to listen to Vio-lence’s discography, then Let The World Burn is the perfect reason to delve into the band’s underrated past, with Oppressing The Masses being the perfect place to start (assuming you haven’t already listened to Eternal Nightmare anyway). Hopefully more material is to follow on from here, for it would be a huge shame if the band were not to follow up on such a statement of intent.

Written on 04.03.2022 by
omne metallum
Just because I don't care doesn't mean I'm not listening.
More reviews by omne metallum ››