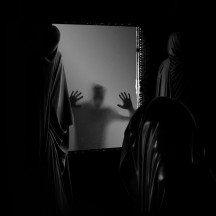 A while ago I had a pretty interesting train of thought. I was reading one of musclassia's reviews for an album which had "Flourishing" in its title, which made me remember that there used to be a great tech death band called Flourishing which broke up, but then I remember that I covered a band in our Clandestine Cuts which was had two thirds of Flourishing in it, and I was wondering what they were up to, since I really enjoyed that EP. Turns out, they had an album upcoming just that weekend. Well, the album is out now, I managed to let it sink in, and now I can say that Aeviterne are a worthy successor to Flourishing. But of course, it's much more than that. Hell, half the band was also in some band called Gath Šmânê, but you don't see anyone calling Aeviterne their successors.

Of course there's more lineup connection that can be discussed, Castevet, Tombs, Fawn Limbs, half of which as a result of the presence of new guitarist Samuel Smith, whose presence also distinguishes The Ailing Facade as a definite step forward from the Sireless EP. It's a bit harder to describe Aeviterne as tech death, even if that's still a component of their sound. The dissonance, the chaos, the pummeling, these are all things that can be expected from the "Gorguts-core" school of tech death, and Aeviterne still cultivate that, but the way they do it is a bit less focused on suffocating atmospheres and complex intricacies in songwriting, but something where the overarching feeling passes between dread and derangement.

There's a unique feeling to Aeviterne's approach, and some of it can be down to the genre blend. There's a slight industrial feel to some of the pummeling atmospheres, some of the post-metal influences recall the dirges on Ulcerate's Stare Into Death And Be Still, there's Colin Marston's hand in mixing which always manages to bring immersion in heavy avant-garde music, and the blackened death moves eloquently between mid and fast paces, injecting either doom or black metal or bass-heavy sludge whenever necessary. The intricacies in the songwriting work less in the "notes per second", but work more long-term in the construction of the pieces, making the music feel more consequential as a result. It's dense when it needs to be, oppressively when it needs to be, scathing when it needs to be, but it never revels in its excesses.

Gorguts-core has been one of my favorite brands of death metal, and I've been impressed with a lot of the disso-death followers. However, it's also easy to see how the sound could eventually grow to stagnate. With The Ailing Facade, another avenue of exploration opens. And it's only the beginning for Aeviterne.

Written on 28.03.2022 by
RaduP
Doesn't matter that much to me if you agree with me, as long as you checked the album out.
More reviews by RaduP ››