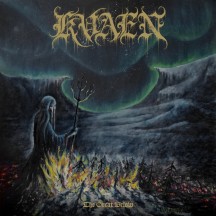 
Kvaen make my job easier by already putting "Great" in the album's title.

Though Jakob Björnfot has been in other bands before, his solo project Kvaen still took everyone, yours truly included, by complete surprise when it unleashed its debut two years ago. The Funeral Pyre also made nikarg's life easier by having "Fun" in its title, though he did not make that joke and I have to do it for him. Kvaen takes a long lineage of one-man black metal bands, embracing a sound that's more melodic and closer to speed metal, creating a sound that doesn't make it feel like a one-man band. And even if there's plenty of other musicians performing some guest spots, the album still feels like "a band album" through and through.

Simply put, The Great Below is masterfully crafted. The songwriting is probably its strongest point, because of how much fun it is without being humorous or tongue-in-cheek in any way, but simply presenting some of metal's best qualities and how well they can be applied. You know: riffs and solos and the like. You'll get a mighty dose of those. The performances are strong, and Tommi Tuhkala takes on the drumming duties completely on this one, whereas he shared them with other musicians on the other record, and there isn't any distracting gap in how the drums are handled. Sprinkle in some thrash, some speed metal, some Viking era Bathory, and Kvaen's melodic black metal is purely scorching, all the while maintaining a dumb grin on my face.

The production is probably too clean for black metal enthusiasts, and though it works hand in hand with Kvaen's take, it does make the general feeling of it feel more like a melodic death metal take on melodic black metal, and not necessarily always in the Dissection way. I wouldn't be surprised to see Kvaen described as black metal for people who don't like black metal. Ain't no black metal that has solos that technical. Maybe that's why I like it so much, because it's an album that's very easy to like, isn't shrouded in ten layers that you have to peel and let it grow on you with each listen. No. You're gonna like what you like about it on first listen. And on the second. Because honestly hard to stop at just one. Especially when the album is under 40 minutes in runtime, and it feels even shorted than that.

The Great Below is a bit more focused than its predecessor, and benefits from amping up the Bathory vibes. The production might still be too clean for its own good, but it helps Kvaen be even more appealing to people who may not generally be into black metal's rawness.

Written on 31.03.2022 by
RaduP
Doesn't matter that much to me if you agree with me, as long as you checked the album out.
More reviews by RaduP ››