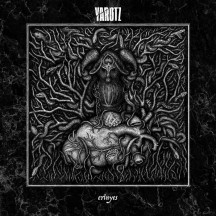 Yarotz, formerly The Third Eye, are a French trio that have just released their debut record, Erinyes. Prior to 2020, they dropped a 3-track demo under their previous moniker, but this is their first release outside of standalone singles since the rebrand. In their Bandcamp bio, they highlight how their ‘hardcore punk-inspired mix of aggressiveness and energy’ also features ‘dark melodies spawned from the post-metal age’, and mention influences ranging from Nails to Chelsea Wolfe; this description gives a fairly accurate warning of what awaits those that listen to Erinyes.

The balance between the styles shifts extensively across the record. For the first song and a half, Erinyes is very much a hardcore album, with “Impunity” a jagged brawler of punky aggro and pained screams, and “Childish Anger” picking up right where “Impunity” left off. However, after more pounding drums and pained chords, Yarotz let up, sliding into a slower, moodier trudge and bringing clean vocals out for the first time. It’s a brief melodic bridge mid-song, and once it’s over Yarotz go right back to all-out attack. However, the seeds have been planted, and they firmly take root during “Vergogna”, a song that’s longer than the previous two combined, and one that uses that length to truly delve into how to combine the extremes exhibited already on the record. With ugly, contorted riffs, atmospheric bridges, emotive use of cleans vocals and convoluted song structures, it retains the animosity that was present from the first seconds of Erinyes but places it within a less primal context.

From here, Yarotz commit the rest of the record to exploring the space between the extremes; “Gold” is ugly, noisy and bitter, and “B.M.A.P.” is eerie and malevolent. Standing on either side you also have the unrestrained hardcore fury of “Caught By The Noose” and the expansive post-metal journeys of “Deliverance” and “Phoenix”. If I were to pull down Erinyes for anything, it would be that all the tracks that follow “Vergogna” fail to quite match the impact of “Vergogna”’s style synthesis; Yarotz are effective but not exceptional when playing post-metal on the likes of “Phoenix”, and their hardcore has all the necessary rage, but without quite possessing either the weight and potency of a band like Calligram or the sheer venom of moments from last year’s Erdve album. The closest that Yarotz get to recapturing the magic of "Vergogna" is with the closer “Last Lust”, which gradually progresses from obliterative blasting and bile via more measured atmosphere-building to a melancholic melodic outro that provides a strong sense of finality to Erinyes.

However, while the album leaves ample room to further explore this musical grey area between two related but ideologically distinct styles, Erinyes is a solid first outing for Yarotz that establishes the trio as very capable of fusing violent chaos with bleak, expansive atmospheres.

Written on 03.04.2022 by
musclassia
Hey chief let's talk why not
More reviews by musclassia ››