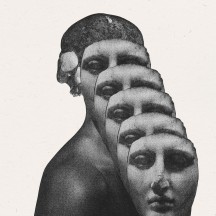 
Out of nowhere: black metal!

I add new releases fairly often, and I do my best to add them at least a day before their actual release date (which reminds me I should start adding ones for the release Friday that's tomorrow), but that's not always a surefire. A bunch of albums just get dropped with no prior announcement. Such was the case that, after I did my fair share of new releases adding, I still see a really striking cover art from a familiar band name. Well, turns out that I was mistaking them for either Ulthar (who I already reviewed) or Ultar (who I'll probably review at some point). Well, I went in blind, purely because of how striking the cover art was. And judging by the fact that I'm reviewing it, even if I hadn't heard the band's previous records (though I'm sure they must be good and I'll give them a listen eventually), should indicate that it's pretty pretty good.

You know that "black metal" isn't necessarily the largest umbrella term, but there's still plenty of variation within it. And it seems like Ultha are pretty determined to make use of that as much as they can. You'll find traces of DSBM in some of the shrieks, atmospheric black metal is always present when you really need to create, as the name implies, atmosphere, there's some shimmering post-black metal too, but it also moves into intense blast-heavy territories full of gutturals to contrast the howls, and you'll find injections of doom, death, and ambient too. It never really commits too much into making any of these aspects a primary part of their music other than it being very versatile black metal. And for an album that's nearing the hour mark on the runtime, juggling effectively with black metal's various tools is almost a necessity.

All That Has Never Been True ends up being a very rewarding listening experience, since Ultha use that variety pretty skillfully without necessarily jumping all over the place. The music flows organically between harsher and mellower sections, finding creative ways to supplement the atmosphere without going into cliché heavy/acoustic/heavy/mellow structures, which would've been a very useful crutch for the long songs that are aplenty here. No section feels like it's there just because a breather or a pummeler is needed, but because it's an interesting section on its own while also supplementing its neighboring ones. It would be easy to just create great puzzle pieces or to just find great way to arrange puzzle pieces. What Ultha ultimately succeed is doing both, hence why All That Has Never Been True never loses my attention.

It's an understatement that this was a massive surprise. I'm still waiting on a potential massive Ultha/Ulthar/Ultar split or collab, but Ultha have really won me over with this one.

Written on 07.04.2022 by
RaduP
Doesn't matter that much to me if you agree with me, as long as you checked the album out.
More reviews by RaduP ››