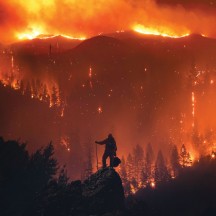 Netherlands is a country that has always had a pretty decent black metal scene, and even if acts like Urfaust and Cirith Gorgor were active for a long time, a lot of it seemed to blossom in the 2010s. From the blackgaze of An Autumn For Crippled Children, the intricate Dodecahedron, the bouncy Laster, the cold Turia and the warm Fluisteraars, and all the acts that form an incestuous member-sharing scene with the last three, like Nusquama, Imperial Cult, Solar Temple, and Iskandr. So at this point it is weird when there's a 2010s Dutch black metal that doesn't have any members in common with any of these. But you might have already heard of Terzij De Horde before anyway.

Terzij De Horde have been around for quite a long while, first staring out under the Liar Liar Cross On Fire band name in 2007 and releasing a demo before thankfully changing the band name to its current form in 2010. That year also marks the release of their first EP, A Rage Of Rapture Against The Dying Of The Light, whose reception was pretty successful over here. However that was 12 years ago, and in the meantime Terzij De Horde have barely released a single actual full length album, 2015's Self. So it's not unconceivable to expect that In One Of These, I Am Your Enemy would try and make up for the lost time, and yet it takes a page from Slayer's Reign In Blood by being a very fulfilling full-length album that's under 30 minutes of runtime.

Terzij De Horde's brand of black metal is a pretty well structured balance between black metal that's a bit more traditional, maybe even a bit second-wave-ish, and a post-black sound that's infused with bits of crust punk, screamo and sludge metal for good measure and dynamics boosting. In One Of These, I Am Your Enemy isn't a fundamental change on this blend, but it tips the balance a bit closer to the pure black metal side, while still retaining the despair inherent in the post and screamo infusions. And you can tell from the cover art and the Bandcamp page descriptions of questioning how worlds are created and destroyed that this is a pretty devastating album. Calling it "emotional" might be a bit of the stretch, but anger and despair also find themselves at a balance here, which is only fitting for a band that's been raging against the dying of the light.

Split up over three tracks, In One Of These, I Am Your Enemy still finds ways to explore both shorter forms in four-minute opener "Cheiron" and longer forms in the other two tracks, both of which linger over ten minutes in the fires of a dying world. Due to how well the album flows, no transition here feels jarring, and even with a relatively short runtime, it doesn't feel like Terzij De Horde are necessarily holding back, but they say everything they have to say. And it's quite commendable not to waste anyone's time. Music to rage against the dying of the world.

Written on 12.04.2022 by
RaduP
Doesn't matter that much to me if you agree with me, as long as you checked the album out.
More reviews by RaduP ››