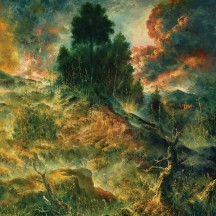 
Doom can be a lot of things, but it's quite rare for it to be cinematic.

First things first. An extreme metal band with a band name starting with "E" releasing their second album called "II" on the 8th of April? Where have I heard that one before?! Jokes aside, both are pretty good albums, but it was Epitaphe that really blew me away. I haven't even listened to I yet, not because II isn't convincing of the band's qualities, but because II is so good that I still haven't gotten enough of it yet (and also because I have a train to catch and I really really need to finish this review before that). It's quite a massive album, both in terms of its 62 minutes runtime, but also in its scope.

In short, Epitaphe is a French death doom band. Usually death doom and doom death are used quite interchangeably, but what's weird is that here they literally can be used interchangeably. It's doom in scope and death in execution. It's not just death metal that is slow and rotten, but it's so lost in its own caverns that nothing emerges but dreadful murk. While on the other side of the spectrum you have doom metal with death metal vocals, here Epitaphe blend the two approaches. And then some. I really have to emphasize just how convincing the death side of this whole blend is, because OSDM has kinda-sorta ran its course, but there's something so bewilderingly good about the cavernous death, with the growls and the murky riffs, that I haven't felt as excited for in such a long time. Now you take this, and contrast it with the fact that three of the five tracks here are nearly twenty minutes in length.

Calling this just death and doom is very much underselling how bizarre Epitaphe are. Maybe not "bizarre", but let's just say that they approach it with a very progressive take on songwriting. The one band I had no idea I'd be reminded of when I first clicked play was Kayo Dot, but then comes a synth and a clean vocal section and somehow it doesn't feel like it's a completely different album than the one that was bludgeoning me before. It's like it has what I love about Wilderun, namely that cinematic feeling where you truly feel like you're lost inside the world of the album, but transposed to a different musical style. II is the kind of prog metal that is more intricate in the long term than in the short term, and even if some puzzle pieces may transition a bit promptly, the effect never wears off.

I can't imagine how difficult it must be to make death metal sound this elegant. You already see how that cover art clearly portrays a very vivid world, and it's not false advertising. This is an album that breathes and roars. It's thunderous in a way that makes me use the word without thinking of something like Clutch or Conan. It moves from funeral doom dirges, to pummeling black metal, to airy prog rock, to blistering blackened doom, and none of it feels out of place. I'm not even sure if I should be in awe of its compositions or how convincing the performances and production make them feel. I'm just in awe.

Once in a while an album comes that just really doesn't feel like an album that you're gonna hear every Friday. The kind of album that makes you feel a bit inappropriate for showering it with so much praise.

Written on 15.04.2022 by
RaduP
Doesn't matter that much to me if you agree with me, as long as you checked the album out.
More reviews by RaduP ››