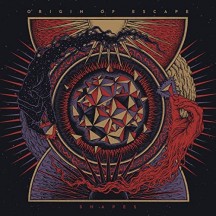 
Do you miss Eden Circus? Well, while that group crawl glacially towards putting out a sophomore album, other bands emerge in the meantime to scratch the same itch.

I didn’t expect Origin Of Escape to fall into that niche when I first heard the name; the name was what drew me into checking out Shapes, their debut album, but only because it’s a song from The Amanuensis by Monuments, an album I vocalized my love for when reviewing the djent heavyweights’ latest album. As it turned out, Origin Of Escape were not Monuments devotees, as there is no djenty metalcore to be heard on Shapes; what is found here, however, is very much appealing in its own right.

Those few here that remember Eden Circus will remember that they straddled the border between alternative and progressive metal, with a bit of a post-rock/post-metal thrown in for good measure; that’s a fairly apt description of Origin Of Escape on Shapes as well. Naturally, the proportions fluctuate between tracks; opener “Milk Teeth” flexes some muscly alt-metal riffs, contrasted against mellow, tender verses, tenderness that extends into the midsection of the song with some lush guitar soloing. In contrast, “Again” opens softly, evocatively growing with percussion reminiscent of a band like Wheel, before eventually exploding in volume around the halfway mark with some powerful vocals and weighty chugs.

What remains consistent across the songs is the richly emotional aura of the music, which, above anything else, is what makes comparisons with Eden Circus inevitable. Like Eden Circus, as well as bands such as Wheel and Tacoma Narrows Bridge Disaster, Origin Of Escape are very adept at coalescing clean, mellow guitar work, understated yet passionate vocals and atmospheric drumming into a potent brew of lush, heartfelt vibes, one that is perfectly exemplified during the opening minutes of “Chase”. Nevertheless, successful dynamic contrast takes music like this to another level, and the ability to deliver memorable riffs and brooding power in their louder riffs means that Origin Of Escape songs don’t sag when they explore the heavier end of the spectrum.

Picking out standout songs on Shapes is tricky, as there’s such a consistency in tone and vibe throughout, and it’s well executed in each instance. “Chase” is thoroughly impressive in how it explores the dynamic range of Origin Of Escape, as is “Shame”, but at that point you start finding yourself just naming each song in succession. While saying this, it’s worth emphasizing that despite this similarity in sound, the songs don’t just blend together; each has enough personality to distinguish itself within the tracklist, even if there’s not great shifts between songs. The weight of “Galaxies” is swiftly contrasted by the more melodic sensibility of “Fake”, during which the distortion is turned down even in the ‘heavy’ parts (well, for the most part). Shapes has a very specific sound, so if you don’t like the first song, you won’t like the rest of it, but if you are on board with what Origin Of Escape are doing, you’ll enjoy it throughout.

There’s nothing really for me to point at here and go ‘that could have been improved’; for a debut record, this is a very mature-sounding record. It doesn’t have a killer song to take it to the next level, but it’s a consistently solid listen throughout. Perhaps as they proceed there’s scope for the band to spread their wings slightly further; every song here falls between 4 and 6 minutes, and as the best song on the Eden Circus debut (“Playing You”) was nearly 9 minutes, there are possible treasures to be found by exploring longer-format songs, alongside some more variation in style. However, those are tomorrow’s questions; for today, Origin Of Escape have arrived quite nicely with Shapes.

Written on 27.04.2022 by
musclassia
Hey chief let's talk why not
More reviews by musclassia ››